The surge in Iraq 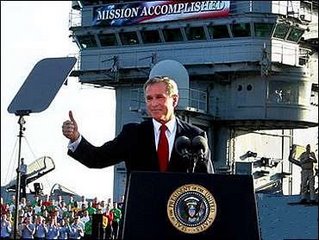 President “bring-them-on” Bush is expected to propose a “surge” of 20,000 additional American troops into Iraq – particularly in Bagdad – to stabilize the situation and buy time for the Iraqi government to take control of the country. In other words, do in the next few months what we have failed to do in the past four years.

The desire to make the streets of that country safe for its people is so strong to almost make one willing to try anything just to make it right. Unfortunately, this administration is obviously less concerned about making it right than saving face. Based upon past experience we can neither trust what President Bush has to say or his judgment to make wise decisions.

The current policy is certainly a failure. Will a surge work? It does not look promising. Withdrawal may very well release the forces of full scale civil war. This is a terrible situation for us to be in but the consequences are far worse for the Iraqi people.

This is James Fallows’ assessment in The Atlantic of why a surge is a bad idea:

The proposition that Iraq can be “fixed” by an increase in troop numbers that is (a) modest enough not to require a huge re-mobilization and reconfiguration of U.S. deployments around the world, and (b) brief enough to count as a “surge” rather than an “escalation” or “re-invasion,” is fantasy.
To be more precise, the argument that it will work rests on elements each one of which is reasonable but that together do not constitute a case for increasing rather than decreasing America’s stake in Iraq. These include: the unstated (by the Administration) recognition that the current course is failing; the belated admission (though again, not publicly by the Administration) that more troops might have made a big difference four years ago; the knowledge that David Petraeus, the newly appointed ground commander for Iraq, has been heavily involved in internal military efforts to lay out a more successful counter-insurgent strategy; and the ever-tempting and always-misleading “next six months will be decisive” fallacy.
Conceivably 20,000 U.S. troops could make things look better around Baghdad for a brief enough time to let the Administration declare “success” and turn things over to the Iraqis. Conceivably. But not probably; if anything, it’s more likely that more troops will mean more targets for IEDs, more large-scale urban combat (with all that does to win “hearts and minds”), and an even higher-stakes disaster. The former Special Forces officer W. Patrick Lang and the former Pentagon budget analyst/ revolutionary-for-truth Franklin “Chuck” Spinney have each recently made this point, in two separate posts both called “Stalingrad on the Tigris.” …
And if it’s unlikely that a “surge” would improve circumstances in the short term, it is inconceivable that a relatively small increase in troops, even with leadership that has learned from nearly four years of gross errors, could reverse the situation in the largest sense.
The country would be doing the wrong thing — another wrong thing — in increasing rather than decreasing its exposure to the disaster it has helped create. It is hard to imagine that this is what the public was voting for two months ago.