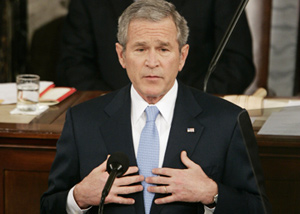 Last night’s State of the Union speech as it pertains to the position he is now advocating in Iraq is a good example. Has he thought this through and weighed all the options? Does he even believe what he is saying?

… the president did nothing to clarify the "surge"—the deployment of 20,000 more U.S. combat troops over the next few months. It's unclear whether even this administration believes in the plan or knows how it will work. The new defense secretary, Robert Gates, has said in recent days that the surge might be needed only through the summer, after which withdrawals might begin. However, at hearings this morning before the Senate armed services committee, Lt. Gen. David Petraeus, the new commander of U.S. forces in Iraq, stressed the need for patience. The new troops will need time to get to Iraq; more time to understand the neighborhoods they'll be securing; more time to conduct operations and secure the area; and still more time to build on the security. These tasks, he said, will be "neither quick nor easy."
So which is it: a brief blip, as Secretary Gates assures us—or a very long haul, as Lt. Gen. Petraeus sternly warns?
"I ask you to give it a chance to work," the president (uncharacteristically) pleaded tonight. In service of this support, he proposed to set up a "special advisory council on the war on terrorism, made up of leaders in Congress from both political parties," to "share ideas for how to position America" to meet today's challenges and to "show our enemies abroad that we are united in the goal of security."
The thing is, there already are advisory councils. They're called the congressional committees on foreign relations, armed services, and intelligence. President Bush had his chance with the ideas of a bipartisan council, the Iraq Study Group headed by James Baker and Lee Hamilton. He dismissed them out of hand. Now he has to deal with the normal constitutional arrangements. That's democracy.
What is most head-shaking of all is that, after four years of this war, the president once more fell short of making its case. As in the past, he said that it's very important—"a decisive ideological struggle," he called it, adding, "nothing is more important at this moment in our history than for America to succeed." And yet he also said that America's commitment to the war is "not open-ended." How can both claims be true? If nothing is more important, it must be open-ended. If it's not open-ended, it can't be all that important.
One reason he can't argue for it is that it's not clear he understands it. "The Shia and Sunni extremists are different faces of the same totalitarian threat," he said. "Whatever slogans they chant ... they have the same wicked purpose. They want to kill Americans, kill democracy in the Middle East." He still seems to view the ever-mounting violence as reflecting a struggle between good and evil, freedom and tyranny. He fails to grasp the sectarian nature of the fight. (Does he really believe that the Shiites and Sunnis are the same—or that, besides the small minority of al-Qaida, they're "totalitarian" in nature?)
He then said, "Americans can have confidence in the outcome of this struggle because we are not in this struggle alone. We have a diplomatic strategy that is rallying the world to join in the fight against extremism."
This is mind-boggling. The largest "coalition" partner, Great Britain, plans to pull out by the end of the year. Most of the others have long since vanished. There is, clearly, no "diplomatic strategy," no "rallying" to recruit others to the fight. A diplomatic strategy and energetic leadership are precisely what everyone is waiting for. They are what President Bush once more failed to offer tonight.