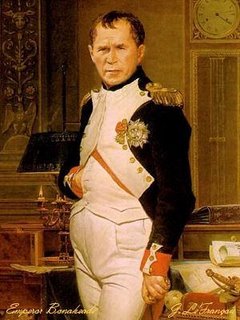 Garry Wills has a very good piece in today’s New York Times about the glorification of Presidents in wartime and the powers implicit in that glorification. Wills points out these days that we constantly hear from “our commander in chief” but the point is the President is not commander in chief of the nation. We are civilians in a democracy and we have no commander. As citizens we need to be on our guard about expanding executive power.

When Abraham Lincoln took actions based on military considerations, he gave himself the proper title, “commander in chief of the Army and Navy of the United States.” That title is rarely — more like never — heard today. It is just “commander in chief,” or even “commander in chief of the United States.” This reflects the increasing militarization of our politics. The citizenry at large is now thought of as under military discipline. In wartime, it is true, people submit to the national leadership more than in peacetime. The executive branch takes actions in secret, unaccountable to the electorate, to hide its moves from the enemy and protect national secrets. Constitutional shortcuts are taken “for the duration.” But those impositions are removed when normal life returns.
But we have not seen normal life in 66 years. The wartime discipline imposed in 1941 has never been lifted, and “the duration” has become the norm. World War II melded into the cold war, with greater secrecy than ever — more classified information, tougher security clearances. And now the cold war has modulated into the war on terrorism.
There has never been an executive branch more fetishistic about secrecy than the Bush-Cheney one. The secrecy has been used to throw a veil over detentions, “renditions,” suspension of the Geneva Conventions and of habeas corpus, torture and warrantless wiretaps. We hear again the refrain so common in the other wars — If you knew what we know, you would see how justified all our actions are.
But we can never know what they know. We do not have sufficient clearance.
*****
Senator Daniel Patrick Moynihan’s prescient last book, “Secrecy,” traced the ever-faster-growing secrecy of our government and said that it strikes at the very essence of democracy — accountability of representatives to the people. How can the people hold their representatives to account if they are denied knowledge of what they are doing? Wartime and war analogies are embraced because these justify the secrecy. The representative is accountable to citizens. Soldiers are accountable to their officer. The dynamics are different, and to blend them is to undermine the basic principles of our Constitution.

The increasing use of the term implies an authority over us that we never bargained for. It becomes an excuse for secrecy and abuse of power. David Kurtz at Talking Points Memo has examples here.

You can (and should) read Wills’ piece in its entirety here.
Posted by Sisyphus at 5:20 PM

4d ultrasounds said...
This comment has been removed by a blog administrator.
1:02 PM