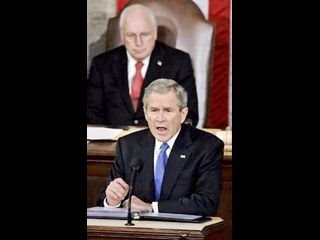 Mr. Bush’s State of the Union address last night was as uninspired as expected. With Vice President Cheney scowling over his right shoulder, the President had little new to offer on Iraq or his “new way forward” by sending an additional 21,000 American troops into that country to take on a variety of different militias fighting one another in order to prop up a government that seems inclined to turn a blind eye to the ethnic cleansing that is occurring in and around Baghdad. He said that Americans did not vote for defeat. (Of course, they did not vote for a reckless, incompetent and corrupt foreign policy either but that’s what they got with this administration.) He said the U.S. must not fail.

The speech included the usual laundry list of items Presidents always throw into these speeches. Most, of course, are going nowhere but they do leave one wondering why none of these things have been accomplished in the past six years when the President’s party controlled Congress.

And the multiple references to Iran, given this administration’s inclinations, were not comforting.
Virginia Senator James Webb – a Democrat who became a Republican and worked in the Reagan administration only to eventually return to the Democratic fold, gave the Democratic response. His presentation was as strong as Bush’s was weak. (There are already suggestions on the web this morning that Webb may be a serious candidate for the Vice Presidency on the 2008 Democratic ticket.) Here is the Washington Post’s assessment of Senator Webb’s response:

Webb accused the president of taking the country into Iraq "recklessly" and forcing it to endure "a mismanaged war for nearly four years."
"Many, including myself, warned even before the war began that it was unnecessary; that it would take our energy and attention away from the larger war against terrorism; and that invading and occupying Iraq would leave us strategically vulnerable," Webb said.
Webb held up a picture of his father as a young Air Force captain. As a small boy, he said, he took the picture to bed with him to remind him of his father's sacrifice. Now, Webb's son is serving in Iraq as a Marine infantryman.
"We need a new direction," said Webb, a decorated Marine veteran of the Vietnam War. "Not one step back from the war against international terrorism, not a precipitous withdrawal that ignores the possibility of further chaos, but an immediate shift toward strong, regionally based diplomacy."
****
Webb concluded his speech with references to former presidents Dwight Eisenhower and Theodore Roosevelt and a warning for Bush:
"These presidents took the right kind of action for the benefit of the American people and for the health of our relations around the world. Tonight, we are calling on this president to take similar action in both areas. If he does, we will join him. If he does not, we will be showing him the way."