Ellison reaches out to Goode 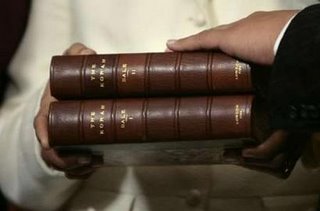 United States Representative Keith Ellison, the first elected Muslim to the U.S. Congress, reached out to Congressman Virgil Goode yesterday immediately following the swearing in ceremonies for the U.S. House of Representatives. Goode had been critical of Ellison and Muslims in general in a letter to constituents and an opinion piece in USA TODAY. Goode objected to Ellison’s use of the Koran during post-swearing-in ceremonies and linked that to objections he had to current U.S. immigration policy particularly as it related to Muslims.

Ellison sought out Goode and shook his hand in a gesture of good will. The Koran Ellison used was once owned by Thomas Jefferson.

WASHINGTON (CNN) -- On his first day in Congress, Rep. Keith Ellison, D-Minnesota, the first Muslim elected to Congress, finally met the Republican who criticized him for his decision to use the Koran at his ceremonial swearing in.

Ellison asked another Democratic member to introduce him to Rep Virgil Goode, R-Virgina, who spoke out against Ellison in a letter to constituents last month. Ellison told CNN that he approached Goode on the House floor and the brief meeting went well.
"I shook his hand and shook mine. We greeted each other." Ellison asked Goode to grab a cup of coffee with him soon and Goode accepted.
Asked if he was felt singled out as the first Muslim member, Ellison said no and added, "By reaching out to Congressman Goode I'm not trying to be accepted, I'm trying to build bridges. In this world there are too many misunderstandings. I want to put a human face on things."
Ellison was sworn in with other House members on the House floor. Later, at a ceremonial, photo-opportunity swearing in with Speaker Nancy Pelosi, he chose to use a Quran once owned by Thomas Jefferson instead of a Bible.
Last month, Goode wrote a letter to his constituents, stating, "The Muslim representative from Minnesota was elected by the voters of that district and if American citizens don't wake up and adopt the Virgil Goode position on immigration there will likely be many more Muslims elected to office and demanding the use of the Koran."
Ellison shrugged off the intense media attention at his ceremonial event, saying, "I figure it's all part of it and I take it all in stride."

In the meantime, President Bush is nominating a Muslim -- Zalmay Khalilzad – to be the United States ambassador to the United Nations. Kalizad is the current ambassador to Iraq. There is no response yet from Congressman Goode.
Posted by Sisyphus at 8:35 AM

The Times-Dispatch headlined its article about the Goode-Ellison interaction, "Goode offers greetings to Muslim lawmaker," the reverse of the CNN article's view of it. Watching the interaction on video at YouTube or WestofShockoe's blog shows that Ellison is definately the one to approach and offer greetings. I don't know why I'm continually shocked at the myriad ways the TD finds to distort reality to support their conservative agenda, but I am.
http://timesdispatch.com/servlet/Satellite?pagename=RTD%2FMGArticle%2FRTD_BasicArticle&c=MGArticle&cid=1149192499913&path=%21news&s=1045855934842