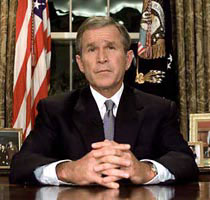 I watched President Bush’s speech tonight with a great deal of hope that this new proposal might actually work. However, there is a very slim chance it will. This president has made one bad decision after another. There is no question Iraq is in a terrible mess but there may be limits to how much good, if any, Americans can accomplish there. Basically, the speech left more questions than answers, let alone reassurances.

Is the presence of American troops attracting violent elements to the country or are they keeping the lid on a situation that will deteriorate even more into civil war if and when the Americans leave? This is a big question in my mind. As bad as the situation is, it can get much worse. On the other hand, I believe most Iraqis don’t care about any good intentions by American troops – the bottom line is Americans are foreign occupiers. As the Iraqis see it, the Americans may have toppled the tyranny but they have allowed chaos and anarchy to rule the country since.

Is this too little too late? I’m afraid that is almost a given. Four years of disastrous efforts at reconstruction by private American contractors and four years of the absence of security are not going to be suddenly turned around in a matter of a few months. Too much damage has been done – not the least of which has been to American credibility. In all honesty, why should the Iraqi people trust us now?

Is this administration simply writing off Afghanistan? Al Qaeda and the Taliban forces have escalated attacks against NATO and the Afghan government over the past year. According to the Baltimore Sun, commanders in Afghanistan expect a major offensive this spring. If there is such a thing as a “war on terrorism” then Afghanistan is where it is being fought.

There is no exclusively military solution to any conflict. Politics is always at the beginning, middle and end of every war. This means a diplomatic outreach to the entire region, including Iran and Syria. This means putting pressure on the Maliki government to clean up its act. This also means making these efforts in Iraq and the region international. Unilateralism is symptomatic of a failure of international leadership. Unilateralism has divided our friends and united our enemies. Unilateralism has been, and remains, the policy of the Bush administration.

Overall, is this President in touch with reality? We have reached this terrible situation for one reason and one reason alone – his administration’s failure acknowledge reality and make appropriate and timely changes in strategy and policy. What this president is asking us to do is to ignore his history of bad decisions, to believe he has suddenly become wise, and to therefore rally behind his proposal.

Andrew Sullivan sums it up this way:

The premise of the speech, and of the strategy, is that there is a national democratic government in Baghdad, defending itself against Jihadist attacks. The task, in the president's mind, is therefore to send more troops to defend such a government. But the reality facing us each day is a starkly different one from the scenario assumed by the president. The government of which Bush speaks, to put it bluntly, does not exist. The reality illumined by the lynching of Saddam is that the Maliki government is a front for Shiite factions and dependent for its future on Shiite death squads. U.S. support for the government is not, therefore, a defense of democracy in a unified country, whatever our intentions. It is putting the lives of American soldiers in defense of the Shiite side in an increasingly brutal civil war.
What we will discover in the next few months, therefore, is simply whether the entire premise of this strategy is actually true. The president is asking us to find this out one more time. He seems to disbelieve the overwhelming evidence on the ground - that the dynamic has changed beyond recognition. His intellectual rubric - democracy versus terror - has not changed to deal with fast-changing events, or to take account of the sectarian dynamic that his appallingly managed occupation has spawned. And so his strategy is no surprise. It would have made sense in 2004, when so many of us were begging for more troops, only to be dismissed as fair-weather warriors, terror-supporters, or lily-livered wimps. We were right. This president was disastrously wrong - and clung to his disproved strategy in the face of overwhelming evidence, supported by the Republican right regardless, until it simply became impossible to sustain the lie any longer.

Hello, Stephen. I can't seem to find an email link for you on this page so I'll leave an irrelevant comment instead.

Would you like to try contributing to the Euston Manifesto Blog?

Email the address at the top of the main Euston homepage if you want to know more.

If it's a civil war we face in Iraq and really the whole middle east, maybe we best pick a side.

That was the West's great failure in the Spanish Civil War.

Forget this inclusion business and talk of political settlement which just seems code for continued Saudi/Whahabi/Sunni domination. We should let those folks play the Iran boogeyman against us much as Fascism played the Communistm card in the Spanish Civil War.