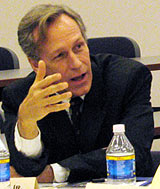 U.S. Representative Virgil Goode has a short piece published in today’s USA TODAY that is basically a rewrite of his notorious letter to constituents a few weeks ago linking the election of the first Muslim to congress to immigration policy which, if not restricted, will lead to the election of more Muslims demanding the use of the Quran that in turn will undermine American values and cause our resources to be swamped, etc., etc. He also took the principled stand stating he did not subscribe to the Quran and would not post it on the wall of his office. If the logic of this thinking sounds a little fuzzy, if not outright loopy, then you have a good understanding of the thinking of Congressman Goode. (And to think this guy is a product of the University of Virginia Law School!)

Here is what was published in USA TODAY by Goode:

A letter I sent in early December was written in response to hundreds of e-mails from constituents upset about Rep.-elect Keith Ellison's decision to use the Quran in connection with his congressional swearing-in. Their communications followed media reports that Ellison, a Minnesota Democrat, had said that he would swear on the Quran. He repeated that at a gathering of Muslims in Detroit on Dec. 26.
My letter did not call for a religious test for prospective members of Congress, as some have charged. Americans have the right to elect any person of their choosing to represent them. I indicated to my constituents that I did not subscribe to the Quran in any way, and I intended to use the Bible in connection with my swearing-in. I also stated that the Ten Commandments and "In God We Trust" are on the wall of my office, and I have no intention of displaying the Quran in my office. That is my choice, and I stand by my position and do not apologize for it.
My letter also stated, "If American citizens don't wake up and adopt the Virgil Goode position on immigration there will likely be many more Muslims elected to office and demanding the use of the Quran."
Immigration is arguably the most important issue facing the country today. At least 12 million immigrants are here illegally. And diversity visas, a program initiated in 1990 to grant visas to people from countries that had low U.S. immigration at that time, are bringing in 50,000 a year from various parts of the world, including the Middle East.
Let us remember that we were not attacked by a nation on 9/11; we were attacked by extremists who acted in the name of the Islamic religion. I believe that if we do not stop illegal immigration totally, reduce legal immigration and end diversity visas, we are leaving ourselves vulnerable to infiltration by those who want to mold the United States into the image of their religion, rather than working within the Judeo-Christian principles that have made us a beacon for freedom-loving persons around the world.

As you can see, he is taking the next illogical step and linking the religion of Representative-elect Keith Ellison to the 9/11 attacks by Muslims. (Of course, there is no mention of the fine Christian gentlemen responsible for the Oklahoma City bombing.) This is typical faux-populist nativistic jingoism.

The editors of USA TODAY ran a response to Goode’s piece referring to him as the loudest of a few ugly voices taking a crude swipe at Ellison and all Muslims. There are posts today at TPM Muckraker and Think Progress as well as Virginia blogs Raising Kaine and Waldo Jaquith. Goode has even inspired Alice at GOTV to poetry.

I was briefly acquainted with Goode back in the days when he was considered a liberal Democrat. I was on the campaign staff of Henry Howell in his 1977 run for governor and worked in Southside Virginia that included Goode’s home turf. Goode was still in his first term as a Senator in the Virginia General Assembly and, as I recall, following in the footsteps of his father who was a well-loved populist politician from Franklin County. However, Goode increasingly was a disappointment. Despite his populist rhetoric, he never really became a voice for the little people – in fact, the members of the Virginia press in their annual assessments of the General Assembly voted him one of the least effective. His state office had a silly little desk he used that looked like something out of a grade school. He did it to make a point but the point he was trying to make escapes me now other than it was clear he placed a lot of value in gimmicks. He started drifting rightward and was a critical vote in defeating the Equal Rights Amendment in the Virginia legislature. After almost a quarter of a century in the Virginia Senate he was elected to the U.S. House of Representatives and switched to the Republican Party. After a decade in Congress he has proven no more effective that when he was in the Virginia Senate. The publicity generated by this silly little letter is certainly the high point of his career.
Posted by Sisyphus at 10:56 PM

Actually it isn't my poem, it is part of a sermon our minister gave. Thanks for the link though.

Uh excuse me. . . Did I read you correctly? “As you can see, he is taking the next illogical step and linking the religion of Representative-elect Keith Ellison to the 9/11 attacks by Muslims.” Are you for real? May I quote you? I just love collecting loony leftist quotes.