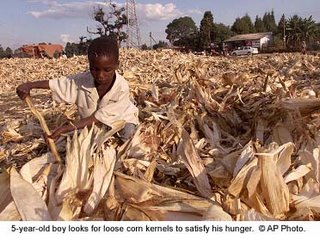 Hunger in Zimbabwe likely to spread. Erratic rainfall hampering the planting season on top of an economy destroyed by the tyranny of Robert Mugabe has made the people of the country very vulnerable to possible starvation.

Zimbabwe is facing a food deficit of hundreds of thousands of tonnes - a third of its requirements - an international monitoring agency warns.
The Famine Early Warning System says the cereal balance sheet projects a shortfall in maize - the staple food - of some 850,000 tonnes.
By December only 152,600 tonnes had been delivered, meaning widespread hunger looks set to continue.
The monitors say Zimbabwe's lack of foreign currency is a key problem.
The Zimbabwean government has refused to allow outside agencies to carry out crop assessments but the Famine Early Warning System used satellite images.
The government plans to import 565,000 tonnes of cereal - 60% of the projected deficit.
"It remains doubtful that Zimbabwe will be able to meet their import goals," the Famine Early Warning System said.
The monitors said a slight increase in national maize production, higher prices for South African maize and Zimbabwe's shortage of foreign currency due to its economic crisis were the leading causes of the lower levels of imports.
Zimbabwe has been gripped by an economic crisis for more than six years and has one of the world's lowest rates of life expectancy and the highest inflation rate.
Donors blame government mismanagement and the seizure of white-owned farms for Zimbabwe's economic problems.
President Robert Mugabe instead blames an international plot to remove him from power.