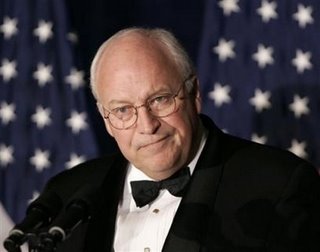 I am not aware of any U.S. Vice President wielding the power that Richard Cheney does. A big part of this is the fact that George W. Bush is a very weak and not very bright President. The Office of the Vice Presidency (OVP) is acting almost like a parallel executive branch with Cheney is filling a vacuum. The appearance is he has a puppet master-to-puppet working relationship with Bush.

David Bromwich has these observations at Open University:

Walter Mondale, interviewed today by Wolf Blitzer, said that in his judgment Vice President Cheney had "crossed a line" the Carter presidency took care to preserve: the line that stops the vice president from becoming an autonomous actor in the framing and the pursuit of policies. He added that Dick Cheney appears to have constructed "a parallel National Security Council" to control national intelligence. Cheney has thus been able to make the statements he wants and to draw the conclusions he prefers from the captive intelligence estimates.
This is a cue the Democratic congress ought to take up soon; and Patrick Leahy, the new chairman of the Senate Judiciary Committee, may have the courage to do it. …reporters are routinely denied answers to questions as simple as: who are the people who work at the OVP, and what are their titles? Secrecy carried to that extent bears the marks of an imperium in imperio, an unchecked power within the power of government. In 2006, the OVP was strong enough to brush back John McCain's attempt to abolish torture; the counter-campaign by the vice president in this rare instance was conducted in public view. The OVP also had a hand alongside the departments of defense and justice in the Military Commissions Act, which now excludes enemy combatants at Guantanamo and elsewhere from the constitutional right of habeas corpus. David Addington, the top lawyer at the OVP, has spent almost his entire career in the service of Dick Cheney, as Alberto Gonzales has almost his entire career in the service of G.W. Bush. Like the idea of an unchecked "interior cabinet," the paths of patronage in this administration are evocative of the early reign of George III…

Alberto Gonzales’s regime may already be subverting the 4th amendment in order to subvert the 1st amendment:

Free Speech Beneath US Homeland Security