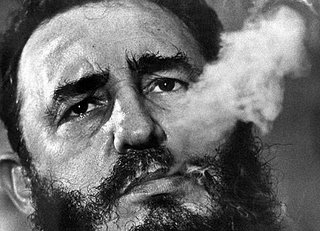 Fidel Castro has ruled Cuba since 1959 when he was instrumental in overthrowing the U.S. backed Batista government. Castro is an old man in ill health – his days are numbered but even with the passing of the dictator there is no guarantee of a happy future for the Cuban people. This blog has argued here and here that the insane U.S. embargo of Cuban must end. This embargo only contributes to misery of the Cuban people and does nothing to prepare the country for stability after Castro.

That said, it is important to remember the tyranny the Cuban people have lived under with the Castro regime. Harry’s Place calls our attention to a piece by the BBC about a Cuban blogger, El Cubano de la Isla. It is an interesting snapshot of contemporary Cuban live.

…As for what will happen in Cuba if Castro dies, this provokes mixed feelings. Most people agree that Cuba needs to change and reform.
People are sure that when Fidel dies a process of change will begin in Cuba, and while many Cubans long for this change, they are very afraid of it at the same time.
Twenty years ago, expressing opinions contrary to those of the government in the street could result in a beating from passers-by.
Today, things are very different. You can say whatever you like in the street without anything happening to you. People have lost that political fanaticism.
But that is only in the street, among the ordinary people. Questioning any official policy or leader in front of an official or policeman is classified as subversion. There is no middle ground - you are either with the government or against it.
Similarly, the internet is completely under state control. The state monopolises 100% of the information that a normal Cuban receives - the internet is seen as a threat to the system.
Most people who have access to the internet only do so from a state-run workplace, like a university or a hospital. Even in those places, there are many restrictions on internet access.
There is also an internet "black market" - people who can afford it can try to get internet services in their homes, but they are a minority.
I would go so far as to say that less than 1% of the Cuban population have internet access in their homes. More internet cafes are opening, but the prices are very high for the average Cuban.
The first cybercafes to open here were only for foreigners - Cubans were not allowed to enter.
As a result of these severe restrictions, there are very few bloggers in Cuba.

Most Cuban bloggers, and the people they exchange opinions and comments with, are members of the exile communities outside Cuba.
By having a blog, you are talking openly about certain themes and it can be quite risky.
That is why I use a pseudonym - because it is important for me to be able to say what I believe.