Iraqi parliament at a standstill due to a lack of attendance 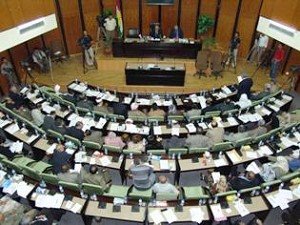 If full-scale civil war is to be avoided the different sides in the conflict have to be able to sit down and work out their differences. That is the reason some sort of representative government – a democracy – can serve as a stabilizing institution for societies.

In Iraq, people died to make elections possible for the choosing of a parliament – exactly the type of institution needed for different segments of the society to come together, compromise differences and make decisions. Yet, according to the a New York Times article today, Iraq’s 275 member parliament is accomplishing little or nothing because it cannot make a quorum. Safety is, of course, a bit concern but apparently a significant number of representatives believe the elected body is irrelevant.

Without a functioning government, people will have little choice but to join militant groups to provide jobs and security for them and their families. With the growth of these militant groups society becomes more polarized and more inclined toward civil conflict. It becomes a downward spiral that 21,000 additional American troops will be challenged to reverse.

This from the New York Times:

… Parliament in recent months has been at a standstill. Nearly every session since November has been adjourned because as few as 65 members made it to work, even as they and the absentees earned salaries and benefits worth about $120,000.
Part of the problem is security, but Iraqi officials also said they feared that members were losing confidence in the institution and in the country’s fragile democracy. As chaos has deepened, Parliament’s relevance has gradually receded.
Deals on important legislation, most recently the oil law, now take place largely out of public view, with Parliament — when it meets — rubber-stamping the final decisions. As a result, officials said, vital legislation involving the budget, provincial elections and amendments to the Constitution remain trapped in a legislative process that processes nearly nothing. American officials long hoped that Parliament could help foster dialogue between Iraq’s increasingly fractured ethnic and religious groups, but that has not happened, either.

****
Some of Iraq’s more seasoned leaders say attendance has been undermined by a widening sense of disillusionment about Parliament’s ability to improve Iraqis’ daily life. The country’s dominant issue, security, is almost exclusively the policy realm of
the American military and the office of the prime minister.
Every bombing like the one on Monday, which killed 88 people at a downtown market, suggests to some that Parliament’s laws are irrelevant in the face of sprawling chaos and the government’s inability to stop it.
****
Each representative earns about $10,000 a month in salary and benefits, including money for guards. …
Representatives who travel from afar stay at the Rashid Hotel in the Green Zone, across a road, two checkpoints and several pat-downs from the 1970s-era convention center. It is not luxurious. It is barely safe. The food is mediocre.
In short, many said, the job is not what members thought they had signed up for.
“Most of them were here for the game, for prestige, for the money,” said Muhammad al-Ahmedawi, a Shiite member of the Fadhila Party. “It’s upsetting and disappointing. We want the members to come, to pursue the interests of their constituents, especially in this sensitive time.”Mr. Ahmedawi said politicians who had larger shares of power before the elections seemed to view Parliament as a demotion best ignored. …
Mr. Pachachi, who is in his mid-80s, said he left Iraq a few months ago because his wife needed open-heart surgery and he did not trust that she would be well cared for in one of Baghdad’s decrepit hospitals. He said he hoped to return in a few weeks, admitting that “one has to be there — you can’t be a member of the Parliament and live abroad.”
But he said the dangers involved with being a public figure in Iraq had made it much more difficult to participate in government. He has 40 guards to protect him when he comes to Iraq, he said, and the salary from Parliament pays for only 20.
“I have protection, and unfortunately the protection is not sufficient for anyone anymore,” he said. “The level of violence has become unmanageable.”