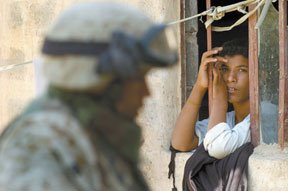 Little is new under the sun including U.S. efforts fighting insurgencies with limited success while political leaders proclaim light at the end of the tunnel.

Here are Marc Cooper’s thoughts on President Bush’s speech and his reminder of insurgencies the United States has fought in the past half century:

Those who were able to pay attention to the President's words and who were able to peer beneath the surface of his rhetoric would find this theoretical foundation: we've screwed up until now but finally we are going to implement a viable hearts-and-minds counter-insurgency strategy. More than a few windbags on the gab shows argued that some of the better and bigger thinkers in the Pentagon were finally going to get their way and take seriously a more winning strategy.
But such a notion doesn't withstand any historical scrutiny. Sure, every ten years or so, the American military establishment re-discovers the keys to winning wars of insurgency. And yet every time they implement these genius ideas they fail over and over again.
Indeed, can someone tell me the last time the U.S. actually won such a war? For 40 years (starting in the late 50's) we backed a counter-insurgency plan in Guatemala and...well.. it dragged on for 40 years. Some 80,000 lives were expended in the meantime. The war was ended through political/diplomatic efforts.
Then came Vietnam. And in spite of popular mythology, we were militarily defeated by the insurgency in that country. The cost: 3 million lives. And the Communist Party is still in power.
El Salvador? I sat in many a briefing by U.S. military officials, usually Vietnam vets, who swore they were implementing the lessons learned from Vietnam. Back then we we heard the same baloney about the Duarte government that we hear today about Maliki i.e. he may be a turd but he's our turd. Not to worry, under our mounting pressure our client government will eventually become civilized and effective. Just as Bush vows that Mailiki will shut down the militias, Reagan swore that Duarte would eventually reign in the death squads (until, that is, the death squad party won the presidency). Meanwhile a guerrilla army of less than 10,000 peasant fighters successfully resisted the U.S. strategy for a dozen years. The war ended only when a U.N. brokered political settlement was reached. The cost: another 80,000 lives.
In Nicaragua we spent hundreds of millions supporting, training and directing the contra insurgency. And to no avail. The contras were forced to demobilize under the terms of the Contadora agreement, a diplomatic initiative pushed primarily by Costa Rica. The war ended through a political/diplomatic solution. The cost: 50,000 lives. And the guy we tried to overthrow was re-elected and sworn back into power last week.
Now, Iraq. And the same recycled reassurances of turning points and breathroughs.

Now the Democrats and Ms. Pelosi et al can carry the ball. It is easy to criticize-what is their plan? Time will tell the tale.