Diane Ravitch, an education historian and member of the first Bush and Clinton administrations’ Education Department, was an early supporter of No Child Left Behind and the promotion of testing and charter schools. However, after reviewing the evidence following the enactment of the legislation became very disillusioned with what she calls the myth of charter schools. She now argues against the practice of rigorous testing that has become so popular with state and national legislators. She believes that education reform should focus on getting children out of poverty, not on vilifying teachers.
Above is an interview with her on the Daily Show this past week.
Posted by Sisyphus at 11:59 AM No comments: 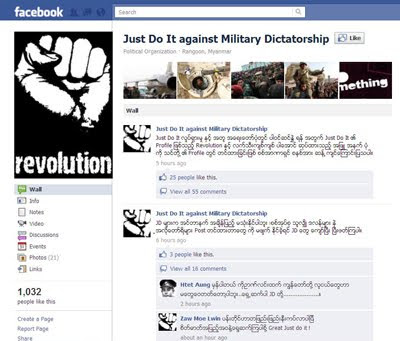 While it is easy to over-estimate the role of electronic social media in the recent wave of revolutions challenging and sometimes toppling authoritarian leaders, Facebook and other such sites still can be useful organizing tools of varying importance from country to country. Democracy advocates in Burma have now set up their own Facebook page to emulate what happened in Egypt. This from The Irrawaddy:

In an attempt to emulate the democratic revolution in Egypt that was sparked by a Facebook campaign, a group of Burmese activists operating inside the country have set up a Facebook page dubbed “Just Do It Against Military Dictatorship.”

The social networking campaign denounces the country's military dictatorship, calls for Burmese military chief Snr-Gen Than Shwe and his family to leave the country and urges the army to join with the people.

The campaign began on Feb. 13—just two days after Egyptian President Hosni Mubarak resigned from office under pressure from protesters.

The Facebook page, now known simply as “JD,” has prompted the distribution of anti-government material in a number of places across Burma and raised security levels in Rangoon.

Due to the limited access to the Internet for many people inside Burma, it remains uncertain how much further the Facebook campaign can go. But the Burmese authorities, notorious for brutal repression against any form of dissent, have apparently heightened security in Rangoon.

Rangoon residents said they saw anti-riot police trucks driving around the city center on Wednesday morning, although this is not unusual and there is no confirmed link between the security measures and the Facebook campaign.

The Burmese state-run media made no mention of the protests in North Africa and private journals were restricted in reporting the news.

You can read the entire article in The Irrawaddy here.
Posted by Sisyphus at 9:51 AM 2 comments:

The latest assault on working people in this country has been a revival of advocacy for so-called “right-to-work” legislation. In most other countries, right-to-work usually suggests something positive as in a guarantee for safe and meaningful employment with fair compensation for that employment. In the United States it means something different – a semantic flim-flam.

Since the enactment of the Taft-Hartley Act in 1947 right-to-work laws are used to weaken labor unions that represent workers. In right-to-work states the government has intervened in the private contract process between employers and employee representatives prohibiting the collection or dues or fees from employees benefiting from the contract unless they volunteer to pay. Anti-labor ideologues present this as protecting the rights of individual employees when in reality all it really does is weaken the organization that represents that employee’s interests before the employer. This is what economists refer to as the “free rider problem”. (The textbook example is if people were given the choice of paying a fare or not when using public transportation the transportation system would soon be overwhelmed and not have enough money to operate.)

Of course, those same proponents of right-to-work would never consider an equivalent right-to-use policy or law for voluntary payment for an individual’s or business’s work product or invention. Dean Baker explains:

"Right to work" is a great name from the standpoint of proponents, just like the term "death tax" is effective for opponents of the estate tax, but it has nothing to do with the issue at hand. It is widely believed that in the absence of right-to-work laws workers can be forced to join a union. This is not true. Workers at any workplace always have the option as to whether or not to join a union.

The logic is straightforward. When a union is recognized as representing a bargaining unit, it legally must represent every worker in that unit, whether or not a worker opts to join the union.

This means not only that nonmembers get the same wages and benefits that the union negotiates with the employer, but the union is also obligated to represent any nonmember individually if that worker gets in a dispute with the employer over an issue covered in the contract. For example, if a nonunion member is threatened with a discipline action or firing, the union must defend this worker's rights just the same as if they were in the union.

Copyrights provide a good analogy to this situation. As we know, it costs money to produce recorded music or movies. All the people who take part in the productions, musicians, actors, technical assistants, and others need to be paid.

This would be the parallel of "right to work" in the copyright world. As it stands, copyright holders are having a difficult time enforcing their copyrights and getting paid for their work (which might suggest a more modern mechanism for financing creative work would be desirable), but imagine that copyright holders had no legal recourse.

It is unlikely that many people would choose to pay for the music they listened to or the movies that they watched if there was nothing stopping them from enjoying this material without paying. This is the situation in which right-to-work laws put unions.

The outcome is obvious; unions will have a much more difficult time staying in place, as many workers will take advantage of the opportunity to get all the benefits of union representation without paying for them. The unions that do survive will be much weaker if the government forces the union to represent people who don't have to pay for its services.

This is why the states with right-to-work laws have much lower rates of union representation than states without such laws. If the government rigs the deck against unions, then it will be very hard for them to survive, just as it would be hard to sell copyrighted material in a world where copyrights were altogether unenforceable.

What’s good for the goose is good for the gander – or so one would think. Of course, the right to work (or use) really isn’t what this is all about – it’s about crushing unions.
Posted by Sisyphus at 12:41 AM 3 comments: 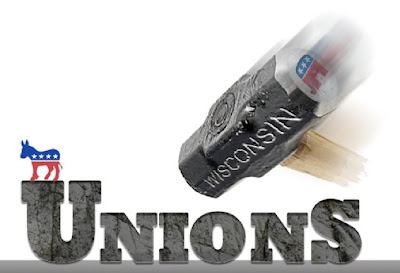 Americans have mixed feelings when it comes to organized labor. According to the New York Times while a third of Americans surveyed view unions favorably and a quarter view unions unfavorably (the remainder undecided) U.S. citizens “oppose weakening the bargaining rights of public employee unions by a margin of nearly two to one: 60 percent to 33 percent.”

Labor history has certainly been messy giving many people pause but unions also represent a threat to the powerful both financial and political. Efforts to destroy the union movements have a long history in the United States and elsewhere. The ongoing effort to crush public sector unions in Wisconsin is only a continuation of the forces set in motion with the passage of the Taft-Hartley Act passed by the Republican congress in 1947 which conveniently undermines a key Democratic Party constituency.

If the reactionary forces in our society are successful in destroying labor we will all – union member or not -- be poorer for it. Ezra Klein explains why unions have a crucial role to play in the United States today:

….First, they give workers a voice within—and, when necessary, leverage against—their employer. That means higher wages, but it also means that workers can go to their managers with safety concerns or ideas to improve efficiency and know that they’ll not only get a hearing, they’ll be protected from possible reprisals. Second, unions are a powerful, sophisticated player concerned with more than just the next quarter’s profit reports—what economist John Kenneth Galbraith called a “countervailing power” in an economy dominated by large corporations. They participate in shareholder meetings, where they’re focused on things like job quality and resisting outsourcing. They push back on business models that they don’t consider sustainable for their workers or, increasingly, for the environment. In an economy with a tendency toward bigness—where big producers are negotiating with big retailers and big distributors—workers need a big advocate of their own. Finally, unions bring some semblance of balance to the political system. A lot of what happens in politics is, unfortunately, the result of moneyed, organized interests who lobby strategically and patiently to get their way. Most of that money is coming from various business interests. One of the few lobbies pushing for the other side is organized labor—and it plays a strikingly broad role. The Civil Rights Act, the weekend, and the Affordable Care Act are all examples of organized labor fighting for laws that benefited not just the unionized. That’s money and political capital it could’ve spent on reforming the nation’s labor laws.

It is no coincidence that as organized labor has declined in membership over the past decades wealth and political power have become more concentrated. The future of our shared prosperity and democracy depends on institutions like labor unions to play the role of the countervailing power in our economy and polity.

You can read the New York Times article here and Klein’s piece here.
Posted by Sisyphus at 9:20 AM No comments: