The price tag for the “War on Terror” 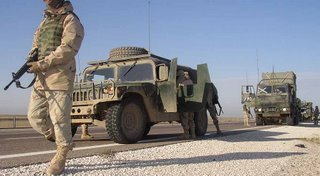 The costs of the “War on Terror” – mostly funding the military operations in Iraq – will soon surpass the cost of the Vietnam War according to one calculation. Another calculation taking into account indirect costs is five times higher. According to Congresswoman Zoe Lofgren, "When you say for what we're spending in a month in Iraq, you could fully fund and double the science budgets of the United States and come up with a viable alternative to oil, it puts it in perspective."

This from Der Speigel:

The Vietnam War lasted ten years and cost the equivalent of $662 billion -- the War on Terror is set to surpass that price tag in 2007. In fact, according to some economists, it already has -- five times over.
Whether US President George W. Bush's "War on Terror" has achieved its aims is debatable. One thing is for sure, though: It hasn't been cheap. The price tag on Bush's initiatives to defeat Islamist terrorism is set to exceed that of the Vietnam War -- and that's a conservative estimate.
According to the US government's Congressional Research Service, the Vietnam War cost the US the equivalent of $662 billion (€512 billion), in today's dollars, between 1965 and 1975. The Los Angeles Times has compared this figure with the costs for the War on Terror, which began in 2001, and come up with the conclusion that this year the costs will be surpassed.
Steven Kosiak, director of budget studies at the Center for Strategic and Budgetary Assessments in Washington, has calculated that between Sept. 11, 2001 and the end of the 2006 fiscal year the US spent around $400 billion under the heading of "fighting terrorism." This covers the expenditure on the Afghanistan war and the operations in Iraq since March 2003, but also includes spending on Bush's other "wider global war against terrorism," Kosiak told the Los Angeles Times.
In the 2007 fiscal year there will be the additional $70 billion that has already been approved by Congress, not to mention the additional $100 billion that Bush is expected to ask Congress for. When all the numbers are added up, the US will have spent at least $670 billion by the end of the year -- more than on the whole of the Vietnam War.
The figures illustrate just how expensive the war in Iraq has been. During World War II -- the biggest armed conflict in the history of mankind -- the US only hit the $600 billion mark (in today's dollars) in mid-1943. By that stage, the Germans had already been pushed out of North Africa, a large part of the Japanese fleet had been destroyed and the big offensive on European territory, which would eventually lead to the end of the war in Europe, had begun.
The Iraq War is by these standards hardly comparable -- but it is already so expensive that its price tag is beginning to reach "historic proportions," writes the Los Angeles Times.
The paper quotes politicians from Washington who have up to now held back in criticizing the costs of war, so as not to unsettle the home front -- but even they are now voicing criticism. "When you say for what we're spending in a month in Iraq, you could fully fund and double the science budgets of the United States and come up with a viable alternative to oil, it puts it in perspective," Democrat Congresswoman Zoe Lofgren told the paper.
The usually-loyal Bush supporter Judd Gregg complained about the lack of caution on the part of the government, saying it was spending money "without any discipline." A lot of the criticism goes back to the fact that Bush asked Congress to approve emergency-spending bills for a large part of the costs of the Iraq War -- thus circumventing the usual approval process.
The official price tag is, however, disputed. According to calculations by the economist Linda Bilmes, the war in Iraq -- not taking into account Afghanistan and the wider anti-terror campaign -- has already cost a lot more than Vietnam. German business daily Handelsblatt reports that at the 2007 annual conference of the American Economic Association (AEA), Bilmes named a figure of $3 trillion dollars -- almost five times Kosiak's estimate.
The difference between the figures lies in the fact that Bilmes, an economics professor at Harvard University, takes into account the indirect costs of the war -- in particular the cost of taking care of wounded soldiers. Hundreds of thousands of Iraq veterans will require disability pensions for the rest of their lives. The ratio of dead to survivors is the big difference between "Operation Iraqi Freedom" and previous wars. During World War II the ratio was 1.5 wounded for every dead soldier, while in Vietnam it was 2.8 -- in Iraq it's 16. Far more soldiers are being wounded in Iraq than killed, which pushes up costs.
At the AEA conference last year, Bilmes, along with Nobel Prize winning economist Joseph Stiglitz, said that the costs had by that stage hit between $1,026 billion and $2,239 billion. Stiglitz then listed which war injuries were the most frequent: 20 percent of the injuries were to the brain, a further 20 percent were "critical injuries," while 6 percent led to amputations.
Admittedly, the figures calculated by Stiglitz and Blimes have not gone undisputed. They include costs related to the increase in the price of oil, which they assume is due to the conflict.
What is certain is that they have been better at their calculations than, say, Bush himself. Before the war began, he predicted it would cost between $100 billion and $200 billion.