Bush’s State of the Union: nothing new to say 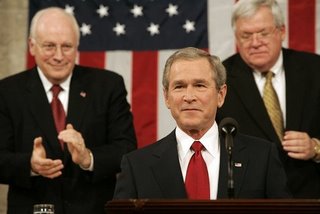 The presidential State of the Union address to Congress was started by George Washington but discontinued by Thomas Jefferson. (He considered it too monarchical – comparable to the speech given to Parliament by the Queen.) It was revived by Woodrow Wilson and continued ever since unusally by a personal appearance and delievery by the President but occasionally submitted in writing.

Tonight President Bush stands before congress and other national leaders to offer his assessment of the state of our union and his proposals for the coming years. However, he does so as the public has completely lost confidence in his ability to lead wisely or to tell the truth.

So how significant will this speech be tonight? Not very, according to David Corn in today’s Guardian:

… Bush's SOTU (as the abbreviators call the State of the Union) is likely to be one of most irrelevant annual speeches in years. He has already addressed the most pressing matter of his presidency. Two weeks ago, he presented a speech on his Iraq policy, announcing an escalation that would entail the dispatching of more than 20,000 additional troops, mostly to Baghdad. (After the speech Secretary of State Condoleezza Rice insisted this was no "escalation," just an "augmentation.") For months - ever since Bush dumped Pentagon chief Donald Rumsfeld following his party's loss of Congress - the public, the politicians, and the media had been waiting for Bush's "new" plan for Iraq. Bush unveiled that plan, to much political and popular opposition. Having had his say on Iraq, there is now not much else that anyone wants to hear him talk about.
Still, Bush is committed to standing at the lectern and unveiling policy proposals about problems other than Iraq. Yet with Congress in the hands of Democrats, his initiatives - whatever they are - will generally face dismal odds. In the past, he used the State of the Union to call for a grand mission to send humans to Mars and for more energy independence. But such programs, even when Republicans controlled Congress, did not get far off the ground. His proposal for the partial privatization of Social Security - once featured in a SOTU - exploded in his face. Even Republicans now deride his Mars idea as a legendary SOTU misstep.
This year, there is pre-speech talk that Bush will again refer to alternative energy and maybe global warming (how about driving to Capitol Hill in a Prius hybrid?) and that he'll propose taxing people who receive expensive health care insurance at work to raise money to pay for health care plans for some currently uninsured. But Democrats have plenty ideas of their own about energy independence and climate change, and it's rather unlikely the health care mavens of the Democratic Party - who are enthusiastic about designing their own health care legislation - are going to take any leads from Bush.
After the Iraq war and Hurricane Katrina, much of America has decided it has heard enough from this president. His recent Iraq speech only served to further distance himself from the public and most of its elected representatives in Washington. There is not much he can mention at this point that will resonate. (Perhaps if he calls for nationalizing the oil companies, that might catch people's attention.) He has defined his presidency with his war in Iraq. The state of Iraq is the state of the union. And he has nothing new to say about that.