The moral dilemma we face in Iraq 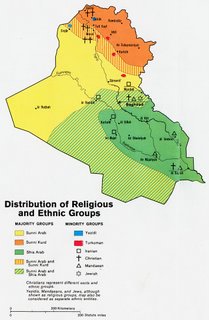 Iraq is just an incredible mess due to the Bush administration. White House management of the actions of our armed forces has unleashed the forces of civil war – a conflict of neighbor-against-neighbor. We have become Dr. Frankenstein and Iraq has become our monster. The options left to us are a variety of bad choices.

President Bush says the United States cannot afford failure as if failure has not already taken place. The so-called surge of an additional 21,000 troops is not enough to reverse the downward spiral in Iraq. At best it may temporarily play a role in decreasing the violence. At worse, it will not only escalate the violence and put us on one side of that conflict – the Shiite – as an unintentional accessory to the ethnic cleansing taking place in and around Baghdad.

One alternative is to simply withdraw sooner rather that later. The problem with that is however awful things are now they can, and most likely will, get worse. Widespread slaughter is not unimaginable and we have a moral obligation to do what we can to prevent that largely because we bear some responsibility for this situation. That’s easy enough to say but what is to be done?

Andrew Sullivan calls our attention to a piece by David Brooks in today’s New York Times. As Sullivan puts it, “…the moral costs of withdrawal are enormous. We would be enabling genocide, a genocide whose conditions we in part created. David, caught as we all are, between failure and horror, is now favoring what he calls ‘soft partition.’”

The Democratic approach, as articulated by Senator Jim Webb — simply get out of Iraq “in short order” — is a howl of pain that takes no note of the long-term political and humanitarian consequences. Does the party that still talks piously about ending bloodshed in Darfur really want to walk away from a genocide the U.S. is partly responsible for? Are U.S. troops going to be pulled back to secure bases to watch passively while rivers of Iraqi blood lap at their gates? How many decades will Americans be fighting to quell the cycle of regional violence set loose by a transnational Sunni-Shiite explosion?
I for one have become disillusioned with dreams of transforming Iraqi society from the top down. But it’s not too late to steer the situation in a less bad direction. Increased American forces can do good — they are still, as David Ignatius says, the biggest militia on the block — provided they are directed toward realistic goals.
There is one option that does approach Iraqi reality from the bottom up. That option recognizes that Iraq is broken and that its people are fleeing their homes to survive. It calls for a “soft partition” of Iraq in order to bring political institutions into accord with the social facts — a central government to handle oil revenues and manage the currency, etc., but a country divided into separate sectarian areas to reduce contact and conflict. When the various groups in Bosnia finally separated, it became possible to negotiate a cold (if miserable) peace.

Partition proposals by Senator Joseph Biden and Les Gelb (here) as well as Ambassador Peter Galbraith (here and here) were discussed on this blog last summer. There are some very real problems with partition – make no mistake, it is definitely not a simple or clean solution – but given the reality on the ground that the country is breaking up anyway this may be a way to minimize the bloodshed. If it can that then it certainly is worth consideration.
Posted by Sisyphus at 10:49 PM