The nuances of anti-Americanism 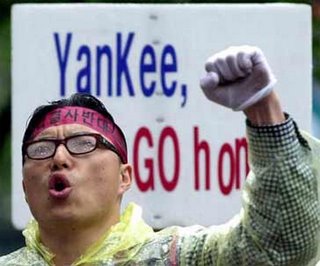 There are people from around the world who disagree with Americans, who distrust Americans, and those who hate Americans. It is important to be able to distinguish between the various shades of anti-Americanism in order to have a fuller understanding of the world and how we interact with one another. There are many Americans who like to lump all dissenters into one huge group creating a huge boogey man to increase the sense of victim-hood and self-righteousness.

A couple of scholars have examined the issue and have come up with no less than four distinct anti-Americanisms. Not only that but their data suggests that anti-Americanism is not as widespread or as deep-seated as many believe. Neil Gross examines their work in the Boston Globe:

… is anti-American sentiment as rampant as it seems? In their new edited volume, "Anti-Americanisms in World Politics" (Cornell University Press), international relations scholars Peter Katzenstein and Robert Keohane bring together a distinguished group of social scientists to consider how much anti-Americanism there is, and whether, in fact, anti-Americanism is any one thing at all.
The plural "anti-Americanisms" in the book's title reveals its core insight: Anti-Americanism is not a single, unitary phenomenon. Instead, Katzenstein and Keohane suggest there are four distinct strains.
The first, liberal anti-Americanism, appears in democracies like France or England. Here opposition to American policies often involves the charge that the United States is being hypocritical by not living up to its professed values and ideals -- values its critics share. When Europeans express outrage over the treatment of prisoners by US military personnel in Guantanamo Bay, or in secret detention centers abroad, these are examples of liberal anti-Americanism. How can a country that says it stands for freedom condone such obvious abuses of human rights?
The second strain, social anti-Americanism, comes from critics of the United States who are staunch supporters of the social welfare state, and thus oppose American economic policy because it promotes laissez-faire ideals and erodes welfare state protections. Social anti-Americanism is at play when Bolivian President Evo Morales, for example, rails against American-led globalization on the grounds that, among other things, it exposes people to the vicissitudes of the market.
More dangerous, according to the editors, are the two remaining strains. Sovereign-nationalist anti-Americanism, which may be found in parts of Latin America and Asia, involves opposition to American geopolitical and cultural dominance on the grounds that they are threats to national identity and strategic interests, as can be seen in Chinese saber-rattling over Taiwan. Radical anti-Americanism, meanwhile, of the kind typically associated with Islamic fundamentalism, holds, according to Katzenstein and Keohane, that "America's identity" must be "transformed, either from within or without."
Too often commentators who have written on anti-Americanism make do with anecdotal evidence: The burning of an American flag, or a chilly electoral climate for politicians who are seen as kowtowing to United States interests, are taken as signs that anti-Americanism is on the rise. By contrast, most contributors to the Katzenstein and Keohane volume rely on quantitative evidence from large-scale social surveys. Two especially noteworthy findings emerge.
First, fewer people around the globe hate the United States than might be imagined. As political scientist Giacomo Chiozza notes in a chapter analyzing data from a survey carried out in 44 countries in 2002, 43 percent of respondents worldwide said they had a "somewhat favorable" view of the United States, and 21 percent said they had a "very favorable" view. To be sure, anti-American sentiment is strong in some countries and regions. In the Middle East, for example, three quarters of respondents had negative views of the United States overall. But in France and Germany, more than 60 percent of respondents had positive views of the United States.
What's more, even where anti-American sentiment is high, people often express appreciation for aspects of American society. While 70 percent of respondents in the Middle East held negative views of the United States war on terror, only about one-quarter said they did not admire the advances made by the United States in science and technology. Similarly, while 57 percent of Egyptians said they disliked American popular culture, a third said they appreciated American ways of doing business. Radical anti-Americanism, encompassing dislike of the United States on all fronts, is rare, and in general there is more dislike for American policies than for the American people.
Second, in most countries, anti-Americanism involves more distrust than outright bias. The distinction is crucial. Where there is distrust, people may be skeptical of US motives and claims, but are open to considering the American point of view. Anti-American bias, by contrast, occurs when policies and actions undertaken by the US government and American corporations are seen as expressions of an unchangeable national identity and character, such that dialogue over disagreements is deemed to have no value.

You can read the entire article here.
Posted by Sisyphus at 8:43 PM

I just returned Christmas Eve from Villfranche Sur Mer, France, and I must say I saw evidence whatsoever of anti-Americanism. While our condo was in Villefranche, we also spent time in Nice and Monaco and Eze, and being French speakers, we were able to visit and shop and eat in the regular sections of town, not just the touristy bits. In all these places I learned from grafitti where to buy drugs locally, and the morals of certain local young women- but there were no anti-American slogans on the walls. I saw no anti-American slogans on T-shirts, and I overheard no such comments. I wonder if that reported anti-Americanism is actually from American expatriates inviting such comments?