Iraq and Iran: What is the significance of that relationship that should impact U.S. policy? 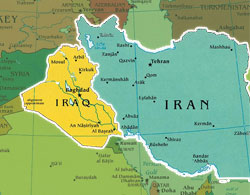 In plotting a policy course in Iraq, how much consideration needs to be given to Iran? It is very important to take into consideration but in doing so it is important to understand the significance of the relationship between the two countries in order to not draw the wrong conclusions.

Peter Beinart has some thoughts on the matter in Time magazine:

… In his speech last week announcing plans to send more than 20,000 additional troops to Iraq, President Bush warned that if the U.S. left, "Iran would be emboldened." Hours later, U.S. troops raided an Iranian office in Iraq's north. The thrust of Bush's strategy now appears less to build democracy in Iraq than to prevent it from becoming a client state of Tehran.
The Administration should relax. Iraq poses big problems, but becoming Iran's flunky probably isn't one of them. There are three main reasons: Iraq's Sunnis, Shi'ites and Kurds.
Sunni Iraqis have feared Persian domination since before there was an Iraq. That fear reached fever pitch after the overthrow of Saddam Hussein. Sunni politicians regularly call their Shi'ite rivals tools of Tehran. If Iraq's Shi'ite leaders want the Sunnis to end their insurgency, they'll have to seriously distance themselves from the mullahs next door. If they don't, the Baghdad government will lack influence over large chunks of the country, since even with Iran's help, Iraq's Shi'ite militias won't easily defeat a Sunni insurgency stocked with Saddam's former officers and bankrolled by oil money from the gulf.
In fact, Tehran probably fears an Iraqi civil war more than it relishes calling the shots in Baghdad. One big reason is the Kurds. The more Iraq unravels, the closer Iraq's Kurds will edge toward outright secession. And the closer they get, the more likely it is that their Kurdish brethren across the border--who make up 7% of Iran's population--will try to join them. As non-Persians (and Sunnis to boot), Iran's Kurds get nothing but abuse from their Shi'ite masters in Tehran. In July 2005, Iranian police killed a Kurdish opposition figure, strapped his body to a jeep and dragged it through the streets of a Kurdish town, sparking riots that lasted six weeks. Many Iranian Kurds would love a country of their own, and events next door could provide the inspiration they need. Instead of Iran's subverting Iraq's stability, it could turn out to be the other way around.
Were Iraqi Shi'ites really an Iranian fifth column, all this might be cold comfort. But the truth is more complicated. Though many Sunnis won't admit it, Iraqi nationalism runs deep among their long-repressed countrymen. As historian Reidar Visser has observed, Iraq's Shi'ites have never launched a broad-based movement to secede. When Baghdad and Tehran went to war in the 1980s, Iraq's Shi'ite soldiers fought fiercely, especially after Iranian forces crossed onto Iraqi soil. It's true that one major Shi'ite party, Prime Minister Nouri al-Maliki's Dawa, took refuge in Iran during Saddam's rule. Another, SCIRI, was actually born there. But since entering government, leaders of both parties have carefully displayed their independence from Tehran.
There's another reason that Iraq is likely to resist Iran's influence: Muqtada al-Sadr. Ironically, the Shi'ite leader America fears most is also the one feared most in Tehran. Al-Sadr is a thug, but he's a nationalist. He wants a strong central government in Baghdad, not a Shi'ite mini-state in Iraq's south. As Ray Takeyh notes in his book, Hidden Iran, Tehran's mullahs fund al-Sadr to cover their bets, but distrust and dislike him.
The thing driving al-Sadr and Iran together is us. From the beginning, al-Sadr has made common cause with anyone fighting the occupation. (In 2004, when U.S. troops were battling Sunni insurgents in Fallujah, al-Sadr sent them aid.) Americans worried during the Vietnam War that if we left, Hanoi would become a puppet of its wartime patron, Beijing. Instead, four years after the U.S. evacuated Saigon, Vietnam and China were at war. When American troops are on your doorstep, it's easy to make common cause. But when they leave, deep-seated rivalries often re-emerge. Our occupation of Iraq helps Iran pose as the patron of Iraqi nationalism. But once we leave, Iran will become less of a patron and more of a target. That's in Iraq's interest, and ours.