Bush’s Iraq proposal: “The most dangerous foreign policy blunder in this country since Vietnam…” 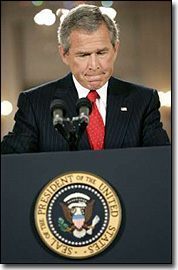 President Bush’s proposal is drawing little, if any, support around the country or internationally. The administration is telling the world it now should be trusted for the way out of the crisis that it is largely responsible for creating. Even Republicans are unhappy with the administration’s current and proposed policies pertaining to Iraq and the Middle East. The latest proposal is what conservative Republican Senator Chuck Hagel has called the most dangerous foreign policy blunder in this country since Vietnam.

Here is an assessment from Der Spiegel:

George W. Bush's last attempt to win the war in Iraq is meeting with strong resistance. His own party is criticizing him with brutal openness, calling his new ideas for Iraq a disaster. Bush is almost completely isolated -- like Richard Nixon during his final days in office.
Bush is facing opposition to his Iraq policy.
Chuck Hagel, the Republican senator from Nebraska, has ambitions to move into the White House. And since the race for electoral victory in 2008 has already begun, Mr. Hagel has no more time for losers -- even if one of those losers happens to be George W. Bush, his own president.
That became brutally clear on Thursday in the Senate Foreign Affairs Committee, which invited Secretary of State Condoleeza Rice to explain President Bush's newest approach to Iraq. Despite being at pains to perform well, the conscientious emissary didn't get very far -- especially since five designated presidential candidates are sitting on the committee.
Hagel scathingly described the strategy outlined by Bush in his address to the nation, televised on Wednesday, as "the most dangerous foreign policy blunder in this country since Vietnam, if it's carried out." Poor Rice sat wordlessly across from him, her face frozen in a trenchant and grim expression. Scornful applause filled the room -- an unheard of reaction in itself.
Himself a veteran of the US war in Vietnam, Hagel was not alone. It was clear none of the newly confident congressional Democrats would jump onto Bush's proposed Baghdad express, which Senator Joe Biden called a "tragic mistake."
But what about the Republicans? One after another, they severed their allegiance to Bush and slated his plans for Iraq. Rather than sighs of relief, all Bush got after his stated decision to send an additional 21,500 US troops to Iraq were evil tidings. Ronald Reagan's former chief of staff Ken Duberstein characterized Bush's strategy as "exceptionally hard to accomplish."
An additional 21,500 troops? Still more billions of dollars for reconstruction? A fresh diplomatic offensive? "I've gone along with the president on this and I've bought into his dream and at this stage of the game I just don't think it's going to happen," said Republican Senator George Voinovich, sounding bitter and resigned.
Those were sobering words. Sure, Bush knew only too well that his blueprint for saving Iraq and himself -- his last attempt, presumably -- would be exposed to political crossfire. "We understand that people are going to be skeptical," said Whitehouse spokesman Gordon Johndroe on Thursday, adding that he hoped they would "take a look at the details of the president's plan."
That's exactly what people did -- and they rejected the details. They rejected the notion that dispatching additional troops to Iraq would require expanding the US military by 92,000 soldiers in the long term -- a project that would cost about $15 billion a year. They also rejected the proposal of mobilizing the National Guard again, as well as the suggestion that parts of Baghdad need to be hermetically sealed off from the rest of the city -- a tactic that already led to "spectacular failure" in Vietnam, as the Los Angeles Times observed.
And yet the president made an obvious effort to introduce unusually humble phrases into this speech in order to win the audience back over to his side. He used the word "mistake" -- a taboo for him, at least until now. He spoke about "failure." He didn't speak about a possible "victory" any longer, but only about "success." And then, at noon on Thursday, he quickly flew to Fort Benning in Georgia in order to stand cheerfully in front of uniformed soldiers and praise the achievements of the Third Infantry Division "that took up the sledgehammer to help liberate Baghdad" -- a vision of victory that has long since faded.

You can read the entire article here.
Posted by Sisyphus at 1:38 PM