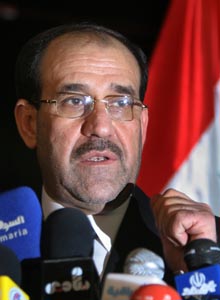 According to the BBC, Iraqi Prime Minister Maliki did not want to be Prime Minister, does not like being Prime Minister and wants only to retire. What is particularly interesting is his unhappiness with the United States. None of this bodes well for U.S. policy in Iraq. At the time he took power he was referred to by many as America’s best hope to stabilize the situation in that country.

Iraqi Prime Minister Nouri Maliki has made clear he dislikes being the country's leader and would prefer to leave the job before his term ends.
In an extensive interview with a US newspaper, Mr Maliki said he would certainly not be seeking a second term.
A compromise choice, his tenure has been plagued by factional strife within both the country and government, and rumours the US has no faith in him.
"I wish I could be done with it even before the end of this term," he said.
"I didn't want to take this position," he told the Wall Street Journal. "I only agreed because I thought it would serve the national interest, and I will not accept it again."
Mr Maliki, a stalwart of the Shia movement which led the resistance to Saddam Hussein, was sworn in as prime minister for a four year term last May after Sunni and Kurd parties rejected the Shia alliance's first nominee.
It followed four months of political deadlock.
He has since been undermined by sectarian tensions within his majority Shia alliance, as well as opposition from Sunni Arab politicians who say he has not done enough to dismantle Shia militias. The manner in which Saddam Hussein was executed has also increased the pressure on Mr Maliki's government.
Correspondents say mobile phone footage showing the former Iraqi leader being taunted as he went to the gallows will make it very hard for Baghdad to convince Sunni Arabs that his execution was not just an act of retaliation against their community by Shias.
As protests continued against Saddam Hussein's execution, the Sunni Baath Party announced it had appointed his former deputy, Izzat Ibrahim al-Douri, as its new leader. In a message posted on the internet, Mr Douri said the death of the former president would "only strengthen their resolve".
Amid the controversy, the US military spokesman in Iraq, Maj-Gen William Caldwell, said the execution would have been handed differently if the US had been involved.
He said US forces had handed "physical control" of Saddam Hussein to Iraqi officials shortly before the execution and all US personnel had left the prison.
Mr Maliki has had a tense relationship with the US.
Late last year, the New York Times published a memo from the White House national security adviser which contained a withering analysis of his leadership.
It described him as "a leader who wanted to be strong but was having difficulty figuring out how to do so" although President George W Bush has subsequently stated that Mr Maliki has his full backing.
Mr Maliki has made his own impatience with Washington clear, accusing the US of failing to provide adequate equipment and training to Iraqi forces.
He repeated his criticism in the Wall Street Journal, saying US-led forces and the Iraqi army had been too slow in responding to the insurgency.