Thousands continue to die in Burma, as the world community does nothing 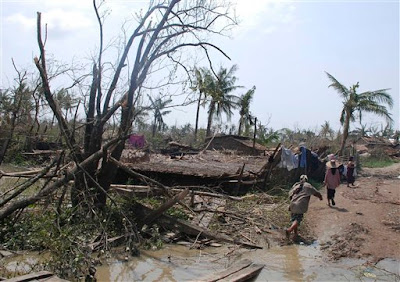 Over a week has passed since a cyclone slammed into Burma (a.k.a. Myanmar) killing thousands and leaving many times that number homeless, injured, and at risk for disease and starvation. The ruling military junta will not allow international assistance for the cyclone’s victims and apparently is doing little or nothing themselves to help these poor people. In the meantime, the international community – in particular the United Nations – complains about this outrage but sits back and does nothing more.

Fred Hiatt has these thoughts in the Washington Post:

Since then the United Nations has averted its gaze as Sudan's government continues to ravage the people of Darfur. It has turned away as Zimbabwe's rulers terrorize their own people. Now it is bowing to Burma's sovereignty as that nation's junta allows more than a million victims of Cyclone Nargis to face starvation, dehydration, cholera and other miseries rather than allow outsiders to offer aid on the scale that's needed.
In light of America's troubles in Iraq, the pendulum in the United States has swung toward multilateral solutions and international law. All three candidates to replace President Bush have promised to restore alliances and put more faith in allies.
But the stalemate in Burma, also known as Myanmar, shows how difficult it is to translate "responsibility to protect" into action. It's hard to imagine a government more deserving of losing the national equivalent of its parental rights; yet it seems more likely that hundreds of thousands of people will die needlessly than that the United Nations will act.
Dr. Chris Beyrer, an epidemiologist at Johns Hopkins Bloomberg School of Public Health, has spent years in and around Burma, fighting the intransigence of the regime to help the Burmese people. What he has learned, as he said last week, is that "the regime does not have the interest of the people as its fundamental concern." Almost all its actions before the storm and since can be understood in this light: The junta cares about its own survival, not the survival of its people.
So even before the devastating storm swept in around midnight May 2, the Burmese were vulnerable. One-third of children under 5 were undernourished. With 3 percent of government spending going to public health, compared with 40 percent to the military, there was a dearth of doctors and clinics. In many areas malaria and tuberculosis posed severe threats.
The government failed to warn people of the approaching storm and has failed to help them since. It apparently does not want to risk whatever benefit might redound to Western countries for deploying the "soft power" of assistance. Saturday it deployed its army northward, to beat and browbeat people to vote yes in a phony referendum intended to make military rule permanent, rather than southward, where 1.5 million people were homeless and 65 percent of territory was under water.
Yet when France reminded the United Nations of its "responsibility to protect," China, Russia and their ever-reliable voting partner, Thabo Mbeki's South Africa, slammed the door. So tons of aid float just offshore as Burma's generals sleep comfortably in their remote jungle capital and China's rulers can proudly, once again, take credit for defending the principle of national sovereignty.
Meanwhile, the Burmese people themselves do not give up. Small teams of aid workers from persecuted dissident groups are making their way south, offering what little assistance they can, though soldiers at times confiscate their goods. And in the delta, one Burmese managed to inform a friend outside, "many people keep looking up to the sky -- literally." Ten days after the cyclone, they are waiting for helicopters, which for many will appear too late or not at all.

You can read the entire piece here.
Posted by Sisyphus at 9:11 AM

You're right on the money in stating that this is a terrible human tragedy.

The US is sending aid right now.

The UN is a pointless organization. Their policing operations and aid operations have generally been failures beyond being laughable.

The question is, how comfortable is the world with another power using its strength to force the junta to actually distribute aid that is now on the ground?