Did Clinton lose because she is a woman? 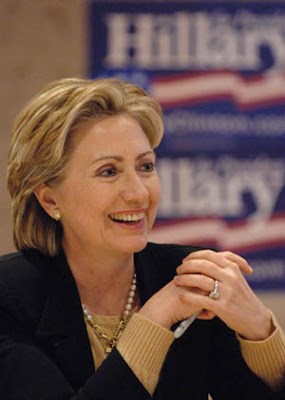 Did Senator Hillary Clinton lose the Democratic nomination for President because she is a woman? No. She was beat fair and square by a better candidate who ran a better campaign than she did. Scot Lehigh sums it up in the Boston Globe:

LET'S SAY Hillary Clinton's remaining primary rival were not Barack Obama but a white male. Suppose she were ahead in pledged delegates, led in the popular vote in DNC-approved contests, had raised the most money, and had attracted the most contributors.

Let's further suppose that her rival had responded to her success by suggesting he might pick her as his vice-presidential nominee. And that, as she gained more momentum, he asserted that superdelegates should nevertheless make him the nominee because he could attract the working-class voters the party needed to win in the fall.

And yet and her camp have made the same suggestions in this campaign. 's political arguments have found a broad acceptance among her backers - an acceptance that's hard to imagine if a similar case were made by a lagging rival in a race led.

And even as those arguments are offered, some of 's backers, as well as some commentators, seem convinced that sexism and double standards are among the principal reasons she has fallen dauntingly behind Obama.

Now, I wouldn't assert for a second that sexism is extinct. It, like racism, is real, and one would have to be purposely oblivious not to notice it in our culture. Further, there are plenty of unhinged Hillary haters out there. And whatever the motivation, we've also seen some exceedingly silly media stories about . High among them rank the deconstruction of her laugh and the attention focused on a outfit that showed a bit of cleavage on the Senate floor. (How that must have shocked the chaste and ascetic monks who have long inhabited that storied chamber!)

People are right to decry boorish anti-Clinton comments, offensive jokes, and the bilge, bile, and billings-gate of the talk-radio blowhards, as well as occasional over-the-top utterances from cable commentators.

But let's not mistake the Bruegelian sideshow for the political mainstream. Even allowing for all that stupidity, the notion that sexism is primarily to blame for 's woes doesn't pass logical muster.

Consider: Last fall, was widely judged the prohibitive front-runner for the Democratic presidential nomination. In early October, she led Obama by a staggering 53 percent to 20 percent in the Post/ABC News poll. At that point, her average lead in national polls was 20 percentage points.

Therefore, if gender bias really were the cause of her primary problem, one would have to posit that a epidemic of resurgent sexism suddenly infected the country late last year.

Further, as Clinton herself has pointed out, she has emerged as the favorite of working-class white men, a cohort sometimes viewed as resistant to women politicians.

A better explanation of her misfortune? Running against a candidate whose talents they underestimated, and her campaign simply missed the boat. They badly misconceptualized the race, casting her as the prohibitive front-runner and inevitable winner. (Remember when CBS's Katie Couric asked how disappointed she would be if she didn't become the nominee, only to have insist, "Well, it will be me"?) Running that way creates a predictable backlash. Convinced she would prevail, ran a cautious, calculating campaign, emphasizing her experience and attempting to finesse difficult issues, at a time when Democrats were hungry for change and eager for something bolder.

Team 's other failings are well documented. They didn't pay enough attention to the caucus states. Expecting to wrap the nomination up on Super Tuesday, they failed to plan adequately for the contests beyond. While Obama used the Internet to build a huge base of smaller donors, 's team relied for too long on big contributors. Meanwhile, Bill Clinton's finger-wagging outbursts and his dismissive comments about Obama's victory thrust him into the forefront, sparking renewed fatigue and alienating black voters.

Bluntly put, it wasn't sexism that has brought to her current plight. Rather, Obama and his team have out-thought, out-sought, and out-fought Clinton and hers. As a candidate, is smart and tough - but Obama has proved the one who better met the moment.