West Virginia past, present and the 2008 Democratic Primary 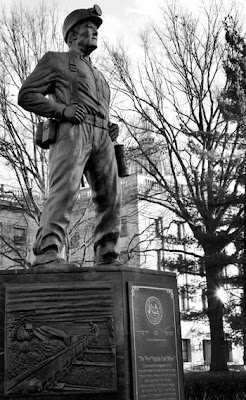 West Virginia holds its primary today for the Democratic Presidential nomination. At stake are 28 delegates to be split proportionately between Senators Barack Obama and Hillary Clinton. The mountainous state has always been known for its poverty as well as boom and bust cycles in coal mining. The state was also known for its reliable Democratic voting patterns throughout most of the 20th century.

However, unlike the past, the current coal boom is not carrying the population with it. Mechanization has permanently displaced most of the mining workforce. With fewer opportunities available the young move on and the state’s remaining population becomes older and more Republican. The state is no longer reliably Democratic as it used to be. Senator Clinton is expected to do well in state today and pick up a few delegates although it will not make a dent in the delegate lead Senator Obama maintains.

Here is former West Virginia native Michael Tomasky in today’s Guardian on how the state has changed in his lifetime:

… it used to be knee-jerk Democratic and isn't any more. Before civil rights and abortion and all those blasted social issues, back when the Democratic party meant unions and working men, hardly a Republican could get elected dogcatcher anywhere (except sometimes the eastern panhandle, where there was no coal to speak of, and hence no unions). Nobody cared that Franklin Roosevelt was an elitist, and everybody was a Democrat, except the small-business people and a few cranks. The state had had segregated schools, but in 1954, in the wake of the Brown decision by the US Supreme Court, they integrated for the most part rather peacefully. In the 1960s and early 1970s, West Virginia - West Virginia! - had one of the most progressive and most respected state supreme courts in America.
In the late 1970s, things started happening. There was a huge controversy over school textbooks in the capital, Charleston, something about evolution as I recall. Slowly, pro-lifers roused themselves to fight Roe v Wade. The Southern Baptist Convention - the conservative umbrella group under which nearly all the right-wing pastors serve - started moving into the state. I once looked this up. When I was a kid there were maybe half a dozen Southern Baptist churches in the whole state. When I looked it up, around 2000, there were more than 300.
And, over the same period, union jobs dried up. It wasn't that the coal was mined out. Oh, no: there's a couple centuries' worth of coal in those hills yet. The technology changed. Jobs that once required 50 men now need just five or 10. They're mining as much tonnage now as they did during the war, or more, even, with something like one-tenth of the work force.
So what are you gonna do? If people get ... OK, let's not say bitter, but frustrated, then by God they have a right to it. And things are unlikely to get better, because, while coal will have to be part of our electricity supply in this country for a long time to come, it is also the case that we need to become less dependent on coal and move toward renewable sources of energy and (in my opinion) more nuclear power. People are developing "clean-coal" technologies, but it remains to be seen whether these will prove politically and financially feasible.
***
And so, it's changed pretty dramatically in my lifetime. As it happens, I was born the last year West Virginia mattered in the presidential primary season. It was 1960, and John Kennedy was running against Hubert Humphrey. West Virginia was advertised in advance as the proving ground for the Catholic Kennedy - could he get votes in a Protestant state? He did, and the mavens of the press decided it meant that JFK could indeed be elected president as a Catholic. That his father bought off half the sheriffs in the state may be true, but nevertheless West Virginia, because of that vote, stood as a symbol of forbearance for many years.
Today ... my dear old friend in Pocahontas County, Ed Tallman, is out volunteering for Barack Obama and blogs on Obama's site. With prescience, he wrote on April 10 that it would be rather ironic if "the state that delivered John F Kennedy to the Democratic party by demonstrating religious tolerance should deliver Hillary the nomination by demonstrating something akin to the opposite of tolerance."
The question of the nomination would seem to be off the table now, but even so Clinton will win the state by 30 percentage points. Of the state's 55 counties, mine, Monongalia, is one of three or four in my estimation that Obama might carry. And, almost certainly, the state will go for John McCain in November, and I think would even against Clinton….

You can read his entire piece here.
Posted by Sisyphus at 8:54 AM