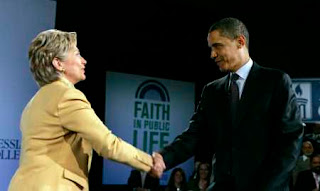 One argument the Clinton campaign uses to promote the New York Senator for the presidency over Senator Barack Obama is that she is a well-known commodity and any “baggage” she brings to a possible November campaign for Republicans to rummage through has already been thoroughly examined. There’s nothing there. There’s nothing negative that is any longer news.

The problem is it’s not true. There's a lot of baggage.
However, Senator Obama has not focused on these multiple past and present controversies swirling around the Clintons because negative campaigning to get elected can undermine the ability to govern once elected. To win support for a progressive agenda, the new president must be a uniting figure who transcends the partisan and personality combat that has had Washington in its grip for the past few decades. It’s time to move beyond the conventional politics Senator Clinton has been so much apart of since she came to Washington in the 1990’s.

John F. Harris & Jim Vandehei have this report in the Politico:

All manner of Clinton controversies, Obama partisans argue, have not been fully ventilated.
This includes old issues, like Hillary Clinton’s legal career, which includes lots of cases that never got much public attention even during the Whitewater era.
It also includes new ones, like recent stories raising questions about the web of personal and financial associations around Bill Clinton. Since leaving the presidency, he has traveled the globe to exotic places and with sometimes exotic characters, raising money for projects such as his foundation and presidential library and making himself a very wealthy man.
Which gets us back to gall. In the fantasies of some of his high-level supporters, Obama would peel off the tape to say something like this:
You want to talk hypocrisy? How about piously criticizing me for Jeremiah Wright when you have a trail of associations that includes golden oldies like Webb Hubbell? (‘90s flashback: He was one of Hillary Clinton’s legal partners and closest friends, whom she installed in a top Justice Department job before prosecutors sent him to prison.) It also includes modern hits like Frank Giustra. (In case you missed it: There was a January New York Times story, which did not get the attention the reporting deserved, highlighting how this Canadian tycoon and major Bill Clinton benefactor was using his ties to the ex-president to win business with a ruthless dictatorship in Khazakstan.)
Obama has never pressed Clinton to talk about Marc Rich, even though the former fugitive financier who won a controversial pardon from Bill Clinton gave money to her first Senate campaign.
He has never mentioned her brothers, even though Hugh and Tony Rodham once defied Bill Clinton’s own top foreign policy advisers by entering into a strange investment in hazelnuts in the former Soviet republic of Georgia (they later dropped the deal) and Hugh Rodham took large cash payments for trying to broker presidential pardons.
Obama is likewise galled to be lectured by Clinton for not being sufficiently committed to universal health coverage. Why is it, his team asks, that Democrats have done so little to advance a long-time progressive goal for the past 15 years? The answer has everything to do with Hillary Clinton’s misjudgments when she was leading the reform effort in 1993 and 1994.
Most irritating of all to Obama partisans is what they see as her latest pose: that she is selflessly staying in the race despite the long odds against her because of devotion to the Democratic Party and the belief that she is a more appealing general election candidate.
It is an article of faith among most people around Obama that the Clintons were a disaster for the party throughout the 1990s. When Bill Clinton came to town in 1993, Democrats were a congressional majority, with 258 seats in the House. When he left in 2001, they were a minority with 46 fewer seats. There were 30 Democratic governors when he arrived, 21 10 years later.
As for electability, the Obama side believes — for all his trouble winning lower-income whites in recent primaries — that it is ludicrous to believe she is the stronger candidate in the fall.
A recent ABC News/Washington Post poll found nearly 60 percent of voters think Clinton is dishonest. Think about that: Only four in 10 voters do not think she lies when she needs to. A majority hold an unfavorable view of her.
Will those numbers improve if she wins the nomination and Republicans resurrect the scandals, the Bill Clinton sexual affairs and her Bosnia fib with the same intensity they brought to the Wright uproar? Unthinkable.
Now that the Democratic superdelegates are facing their moment of decision in this close race, you might think it would be time for politesse to give way to an unvarnished discussion about both candidates' real strengths and liabilities.
The Obama side is frustrated with the news media for not carrying more of its argument. His operatives thought a Newsday story looking exhaustively at her legal career — including the revelation that as a young lawyer she attacked the credibility of a 12-year-old rape victim — would provoke a herd of other coverage. It did not happen.
If he really wanted, Obama could generate all the coverage he wanted about Clinton’s past by leveling accusations in his own words. But that is not going to happen.
Politically, he correctly believes that he would be called out as a hypocrite if he practiced the conventional art of attack politics after preaching against it.
And, to view his motives in the best light — a benefit of the doubt extended by his own team — he believes this campaign would also undermine his governing strategy if elected. He has told associates it would be impossible to win support for a progressive agenda unless he assumes the presidency as a uniting figure who can transcend the personality-obsessed brand of combat that has dominated Washington for the past generation.
“I told this to my team, you know, we are starting to sound like the other folks, we are starting to run the same negative stuff,” he told a crowd in North Carolina this week. “It shows that none of us are immune from this kind of politics. But the problem is that it doesn’t help you.”

You can read the entire article here.
Posted by Sisyphus at 10:56 AM