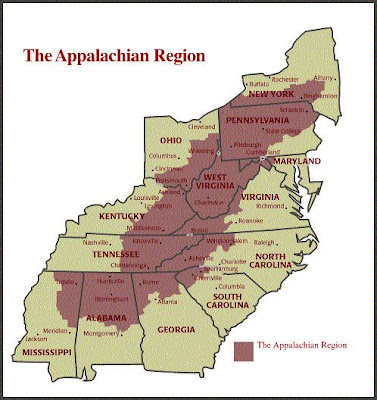 The recent conventional wisdom – promoted in no small way by the campaign of Senator Hillary Clinton – is that Senator Barack Obama has a severe problem in attracting votes from the white working class in his bid for the Presidential nomination. It is a curious charge coming at this stage in the delegate selection process after Obama has won 32 of 49 contests to date. According to Jonathan Tilove, “…seven of the 10 whitest states in the nation have held their primaries or caucuses. The senator has won five and the senator two -- by an inch and now by a country mile.” Senator Obama has won white working class and rural votes throughout the country.

However, Senator Obama did lose by a landslide and struggled in , and and is not expected to do all that well in next week. So what do these states have in common that sets them apart from the rest of the country? .

Josh Marshall has this take on the vote:

There's been a lot of talk in this campaign about Barack Obama's problem with working class white voters or rural voters. But these claims are both inaccurate because they are incomplete. You can look at states like , , and other states and see the different numbers and they are all explained by one basic fact. Obama's problem isn't with white working class voters or rural voters. It's . That explains why Obama had a difficult time in and and why he's getting crushed in and .

If it were just a matter of rural voters or the white working class, the pattern would show up in other regions. But by and large it does not.

In so many words, and have big chunks of within their borders. But those regions are heavily offset by non-Appalachian sections that are cultural and demographically distinct. is 100% Appalachian. If you look at southeastern or the middle chunk of , Obama did about the same as he's doing tonight in .

So what is it about this region?

Let me offer a series of overlapping explanations. First, some basic demographics. It's widely accepted that Hillary Clinton does better with older voters, less educated voters and white voters. These demographics perfectly match -- and, more loosely, the entire Appalachian region. A few key points from tonight's exit polls demonstrate the point: 4 out of 10 voters were over 60 years of age. 7 out of 10 lacked a college degree -- the highest proportion of any electorate in the country. And 95% of the electorate was white.

Basically you have a state that is made up almost exclusively of 's voters. But there's a deeper historical explanation that we have to apply as well -- one nicely illustrated by the origins of itself.

During the 18th and 19th centuries, in the middle and particularly in the Southern states, there was a long-standing cleavage between the coastal and 'piedmont' regions on the one hand and the upcountry areas to the west on the other. It's really the coastal lowlands and the Appalachian districts. On the other side of the Appalachian mountain range the pattern is flipped, with the in the east and the lowlands in the west.

These regions were settled disproportionately by Scots-Irish immigrants who pushed into the hill country to the west in part because that's where the affordable land was but also because they wanted to get away from the more stratified and inegalitarian society of the east which was built by English settlers and their African slaves. Crucially, slavery never really took root in these areas. And this is why during the Civil War, Unionism (as in support for the federal union and opposition to the treason of secession) ran strong through the Appalachian upcountry, even into Deep South states like and .

As I alluded to earlier, this was the origin of , which was originally the westernmost part of . The anti-slavery, anti-slaveholding upcountry seceded from to remain in the Union after seceded from the . Each of these regions was fiercely anti-Slavery. And most ended up raising regiments that fought in the Union Army. But they were as anti-slave as they were anti-slavery, both of which they viewed as the linchpins of the aristocratic and inegalitarian society they loathed. It was a society that was both more violent and more self-reliant.

This is history. But it shapes the region. It's overwhelmingly white, economically underdeveloped (another legacy of the pre-civil war pattern) and arguably because of that underdevelopment has very low education rates and disproportionately old populations.

For all these reasons, if you're familiar with the history, it's really no surprise that Barack Obama would have a very hard time running in this region.

Of course, these are primaries – Democrat v. Democrat – where the differences between candidates are not so much on ideas but style and skin color. The dynamics of this vote will change for the general election when ideology will take on far greater importance. How much this will change is the big question.

OpenLeft.com has a great color-coded diagram that matches exactly what you're saying. If you scroll down to the pixelated map of primary results by country, then the pattern you've identified jumps out dramatically. Kentucky is the only whole in the map that matters in this respect, and one can only assume that it will also heavily favor Clinton. This does not, however, justify her ongoing debasement of the party and the political system.