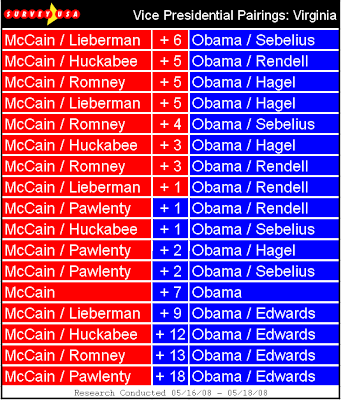 Is the new swing state that will be in play for the 2008 general election for president? That seems increasingly likely. With the influx of new people to the Old Dominion and the growing strength of the Democratic Party in Virginia’s growing suburbs along the urban corridor (I-95 between Washington and Richmond and I-64 between Richmond and Virginia Beach), the state can no longer be counted on as safely Republican.

Survey has a new poll out showing Senator Barack Obama beating Senator John McCain 49% to 42%. This 7 point margin is a reversal of the 20 point margin in McCain’s favor their poll showed in the fall of 2006.

Now it is important – very important – to note that we are six months away from the election. A poll is simply a snapshot in time and this one is for mid-May not early November. Neither candidate has been formally nominated yet nor has the campaign formally began (as hard as that may be to believe). A lot can change in six months and a lot can happen in a campaign how ever long or short. That said, these numbers are still fascinating to examine especially with the additions of possible vice presidential candidates. (Edwards seems to add substantially to the ticket according to this poll but amazingly Webb was not included on the list of possibilities.)

There’s a finite limit to the number of names we can test in a given poll; we’re aware not naming Jim Webb in (or Bill Richardson in , among others) seems an oversight. Asking the same names in each state does mean it will take us a little time to cover most of the possibilities — and we think there’s value to getting a baseline tracking point for the less likely possibilities as well. Doing so means that SurveyUSA can show you that in October of 2006, John McCain led Barack Obama among ’s registered voters by 20 points. Today, 19 months later, the same question, using the same methodology, as you can see in the table below, shows Barack Obama defeating John McCain by 7 points.