Are there just too many people for this planet?: Why we should be actively distributing and promoting the use of contraception 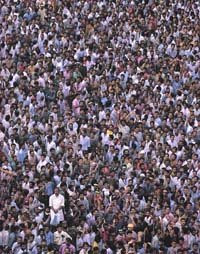 Overpopulation of humans has been has been a hot topic since Thomas Robert Malthus argued that the population will exceed the population’s resources and therefore a large segment of humanity will always be relegated to poverty. He argued that excessive population growth could only be checked by famine and war. His application of natural selection to the human species was a contributing factor in the popularity of the “survivor of the fittest” ideology known as Social Darwinism that gave rise to the concept and attempted practice of eugenics during the late 19th and early 20th centuries.

Malthus did not take into account the rise in living standards resulting from industrialization and later the green revolution. The planet can sustain far more people than Malthus ever imagined. Yet, there are legitimate concerns about limits of available food, water and living space that impacts on the quality of life for a constantly growing population. The heavy handed birth control policies of the Chinese government may have appeal to some but the punishments for pregnancy and forced abortions leads to a brutalization of the public by the authorities that simply is not acceptable. Rather, the world community – particularly the wealthier Western nations – should be distributing and promoting the use of contraception around the entire globe. People will act in their own self-interest if they have the means. “The funding for contraception aid has been stagnant for decades," says Robert Engleman of the Worldwatch Institute. We need to change this.

Johann Hari agrees. Here are his thoughts in The Independent:

… Every year, world population grows by 75 million people – equivalent to another Britain and Ireland whooshing fully-populated from the oceans. At the turn of the 18th century, there were 600 million people on earth. At the turn of this century, there were 6.6 billion. By the time I am in my sixties, there will be more than nine billion – at which point there will be more people alive simultaneously than in the first 17 centuries after Christ combined.
The overpopulation lobby say this will inevitably leave more and more people chasing after a diminishing amount of resources on an ecologically-ravaged planet. At their most pessimistic, they say human beings will, in the long sweep of planetary history, look like a big-brained version of a locust cloud. They eat everything in sight and multiply fifty-fold – until they have consumed everything, when they turn in desperation on each other, munch off their siblings' heads, and then fall out of the sky dead.
They say with a frown that this global swarming is driving global warming. How can you be prepared to cut back on your car emissions and your plane emissions but not on your baby emissions? Can you really celebrate the pitter-patter of tiny carbon-footprints?
Yet this subject seems to leech out all the dark toxins of environmentalism – a movement I believe is the most urgent and important in the world. There has always been an element of green thinking that viewed humans as a parasitic infestation, wrecking the Eden of planet earth. The philosopher John Gray calls our species "homo rapiens". The founder of Earth First!, Dave Foreman, called us "Humanpox" and wrote: "The Aids epidemic, rather than being a scourge, is a welcome development in the inevitable reduction of human population... If [it] didn't exist, radical environmentalists would have to invent [it]."
If environmentalism sounds – or is – misanthropic, we will lose the argument. Most human beings will never think the world would be better off without us. Nobody thinks they are the surplus human being who should not have been born. These strident arguments hand a huge gift to the anti-greens, who always said we were anti-human beneath the surface.
It also looks like displacement. The places where population is growing fastest – sub-Saharan Africa, rural China and Bangladesh – have virtually no carbon emissions, and pitiful food consumption rates. The gap is so huge that to be responsible for as many gas emissions as one British person, a Cambodian woman would need to have 262 children. Can we really sit in our nice homes, with a fridge-full of food we will mostly chuck away and an SUV in the drive, and complain that she is the problem?
Once this gut-reaction has kicked in, I then think of the horrible history of overpopulation predictions. Most famously, the 18th century demographer Thomas Malthus said mass starvation was inevitable because population increases geometrically while food production grows arithmetically. He didn't anticipate the coming of the Industrial Revolution. His successors in the 1960s, like Paul Ehrich and the Club of Rome, similarly didn't see the Green Revolution that was galloping around the corner of history.
So it is tempting to say now that the overpopulation argument will smack into some new technological development. It's not quite true to say there is a diminishing amount of resources, because the genius of human beings is to find new ways to use what is there. Two centuries ago, nobody could have conceived that the sun's rays or the waves in the ocean were a resource to be used – but solar and tidal power make it so.
And yet, and yet ... why do my own arguments leave me echoing with doubt? A dark voice in my head says: you would accept that, to pluck an absurd number, 100 billion people would be too many. You don't think human genius is infinitely expansive; there is a limit to what it can solve. So isn't the question just where you draw the line? If 100 billion is too much, why not nine billion?
Hmm. You should always take on the best arguments of your opponents, not the worst. There are good people – a world away from the British royals or the human-hating fringes – who are sincerely concerned about population levels: people like Professors Chris Rapley and John Guillebaud. They argue that although the swelling billions are not now emitting large amounts of greenhouse gases, they will see that we are doing it and will (totally understandably) want to join in the carbon bonfire.
But if this is a problem, is there a solution that isn't abhorrent? Some people seem to reach instinctively for authoritarian answers. The government of China has bragged that its "greatest contribution" to the fight against global warming has been its policy of punishing, imprisoning or sterilising women who have more than one child. Some environmentalists – a small minority – eye this idea jealously.
There is a far better way – and it is something we should be pursuing anyway. It is called feminism. Where women have control over their own bodies – through contraception, abortion and general independence – they choose not to be perpetually pregnant. The UN Fund For Population Activities has calculated that 350 million women in the poorest countries didn't want their last child, but didn't have the means to prevent it. We should be helping them by building a global anti-Vatican, distributing the pill and the words of Mary Wollstonecraft.
So after studying the evidence, I am left in a position I didn't expect. Yes, the argument about overpopulation is distasteful, often discussed inappropriately, and far from being a panacea-solution – but it can't be dismissed entirely. It will be easier for 6 billion people to cope on a heaving, boiling planet than for nine or 10 billion – and we will only get there by freeing women to make their own reproductive choices. To achieve this green goal, it's necessary to mix some oestrogen into the environmentalist palette.