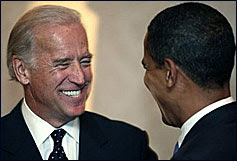 Barack Obama has chosen Senator Joseph Biden to be his running mate for the 2008 Democratic presidential and vice presidential nominations. (I received the text message on my phone at 3:29 a.m. – I had it by my bed.) The choice of a running mate is always complex with a number of pro and con factors weighing in for each possibility. This was no different for Biden but one of his major assets was his experience with foreign policy.

First elected to the Senate to represent in 1972 and has served three decades on the Senate Committee on Foreign Relations. He is currently the chairman of that committee. In 1997, he became the ranking minority member and chaired the committee from June 2001 through 2003. He assumed the chairmanship in 2006 when the Democrats again took control of the Senate.

Blake Hounshell of Foreign Policy magazine has these thoughts on Obama’s choice of Biden:

I think Joe Biden is a smart choice for Barack Obama. With nearly 36 years in Washington and much of it atop the Senate Foreign Relations Committee, the senator's got decades of knowledge about how the national-security apparatus works and a clear-eyed, unromantic view of 's role in the world.

This experience has made Biden nothing if not extremely confident in his views, which makes him well suited to play the role of Democratic attack dog on foreign policy.

One of his favorite tactics is ridicule: Everyone remembers him saying that a Rudy Giuliani sentence has only three words: "a noun, a verb, and 9/11" during the primary season. But Biden's a pretty serious guy, too. He believes Democrats, who usually poll below Republicans on national security, shouldn't "play defense on foreign affairs," and he leads by example in his frequent op-eds and appearances on the Sunday talk shows.

… as much as he likes to talk, Biden's actually a pretty nuanced foreign-policy thinker. He doesn't have strong ideological views, so he's hard to pigeonhole. Looking over his statements and policies over the years, I'd say he hews to a pragmatic form of liberal internationalism backed by American power. I think he takes his responsibilities very seriously.

He uses the term "national interests" frequently, but he's not quite a Scowcroftian realist -- as his push for action in the Balkans and Sudan demonstrates. Nor is he quite a "liberal hawk," either. He has little patience for sweeping rhetoric about how the United States is bringing freedom and democracy to Iraq, and he doesn't (unlike certain other Democratic senators who were passed over for veep) default to the hawkish position on national security just for the sake of sounding "tough". He believes that some situations call for toughness () while others call for engagement (). He understands both the need for and the limits of multilateral institutions, and he doesn't see multilateralism as an end in itself, unlike some in his party.

That said, Biden doesn't bat 100 percent. He went ahead and supported the war despite warning that President Bush was underestimating the risks (he now says he didn't realize Bush would be so incompetent and that he thought Saddam could be deposed by other means). He called the surge "a tragic mistake" in February 2007 while John McCain has backing it wholeheartedly.

But he has gotten lots of other issues right, in my view: He has been calling for years for more resources in Afghanistan, for a more coherent U.S. relationship with Russia, for engagement with Iran, for a broader U.S. strategy toward Pakistan, and so on.

Vice President Biden. I like the sound of that (even the office should be abolished)

He was supporting a war before Bush. He was one Democrat who convinced me we needed to get tough. Check Biden, Iraq, and Obama's Betrayal for an anti-Iraq War take on Biden's history here. A take which is much how I recall a Biden I once supported and turned to for guideance.

I have a very clear recollection of Biden during the ramp up for invasion saying post war occupation would be long and difficult. I agreed... and then Biden went and turned on the administration when the course he advocated turned long and hard...

He's got no business near the White House. He can't claim he was bamboozled by Bush. Biden knew and couldn't stick it out...

As I've said before on other sites, it's a safe choice and covers Obama's most glaring blind spots.