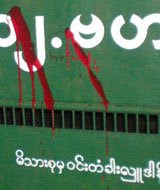 As the world tuned into the opening of the 2008 Summer Olympics in China students in Burma (a.k.a. Myanmar) spray-painted schools, government facilities and other public buildings with red to symbolize the blood the victims of the “8888 Uprising” twenty years ago. On August 8, 1988, the Burmese pro-democracy movement rose up against the military dictatorship in peaceful demonstrations. The dictatorship responded by crushing the movement that included the murder of at least 3000 people.

Last fall activists from a new pro-democratic movement demonstrated peacefully around this south Asian country. Again, their movement was brutally suppressed by the military dictatorship.

Yet, the movement remains alive, however weakened.

A protester outside the Burmese embassy in London marks the 20th anniversary of the 1988 uprising.
The culprits came shortly before midnight. It was raining, and the traffic was light on Uyza Road in downtown Rangoon at this late hour. They sprinted across the street, pulled out their spray cans, painted a red cross onto a yellow traffic sign and disappeared into the darkness again.
The red crosses and bursts of color that are now appearing with more and more frequency in the country's major cities are meant to signal renunciation, disgust and resistance. They are the signs of a new opposition movement known as the "Red Campaign." Its members, young university students, operate in small groups of no more than five people. They risk everything for their underground struggle against the omnipotent state.
Secrecy is their highest priority, because the junta of stone-faced generals that has ruled Burma with an iron fist for decades has its spies everywhere and treats its enemies ruthlessly. When a wall at a university was found covered with inflammatory flyers a few days ago, it was the military, not a cleaning crew, that was promptly brought in.
The flyers read "Remember 88," a reference to the August 8, 1988 uprising against the military regime of former dictator Ne Win. At the time, one million Burmese took to the streets in typically Buddhist nonviolent protest, demonstrating for a democratic society. Thousands died in a hail of bullets when the military fired on the people. Although Ne Win eventually relinquished power and proposed a multiparty system, the next junta soon came to power in a military coup, and opposition leader Aung San Suu Kyi was placed under house arrest for years.
Suu Kyi is still not permitted to leave her home. Last Friday additional security, in the form of roadblocks, a fire truck and special police, was sent to guard her house, which is already surrounded with barbed wire. On the anniversary of the uprising demonstrations were staged to express solidarity with the graceful 63-year-old winner of the Nobel Peace Prize, but only abroad, in front of the embassies of Burma and its protector, China. There were protests in Bangkok, Manila and Tokyo to demand freedom for Burma and for Suu Kyi.
But things remained quiet in Burma, where the junta retains tight control over the country. Only one silent protest march was reported, in the city of Taunggok, where up to 50 people were arrested.
As the protests by Buddhist monks a year ago showed, open resistance requires great courage. As a result, most forms of resistance today are of the hit-and-run variety, such as the red color brigades' spray-painting campaign. Nevertheless, the historic date of 8/8/88 has remained significant to the Burmese, who are very superstitious and preoccupied with symbols of all kinds, as a constant reminder of the fact that the generals are prepared, at all times, to secure their hold on power with extreme violence.
Another movement, called "88 New Generation," uses poster campaigns. One of their leaders goes by Nay Myo Khaing, which, of course, is not his real name. The 40-year-old man, a teacher, looks around nervously and his hands shake. He destroys his notes during our conversation, anxious not to leave any traces behind. Almost all of his fellow dissidents are now in prison. Khaing says the government has seldom hunted down its opponents as mercilessly as now. For the past few days Khaing has been wearing a black T-shirt and a pair of black jeans -- as a sign of mourning and in silent protest.
Red was the color of the hour in September 2007, when tens of thousands of monks, wearing their traditional robes, spent days marching through the streets of Rangoon. The images circled the globe, and the government of General Than Shwe, 75, faltered briefly but then quickly recovered. A wave of arrests and a few killings were the result.
Since then even more fear has prevailed in Burma, and the depth of poverty and suffering among the Burmese has increased since Cyclone Nargis devastated the country. The military, with its roughly 400,000 soldiers, did virtually nothing for weeks, inaction for which the sorely afflicted and tolerant Burmese are unlikely to forgive them.
"The government has never been hated as much as it is now," says Nay Myo Khaing. But can his movement take advantage of popular resentment and turn it into political energy? Khaing seems at a loss, as the monsoon rain drums down onto the corrugated metal roof. Protests are planned for the fall, he says, but everything remains vague. Dissidents like Khaing are hesitant to pin down any plans, not knowing which activists will even be at large then -- or whether, once again, their plans will be foiled.
The people feel humiliated, spied upon and locked up. E-mail services are being blocked and newspapers censored, and the only content approved by the government consists of dull propaganda. But the Burmese are running out of the strength they need to rebel against these conditions. "Even the monks have withdrawn, after so many of them disappeared into the prisons," says Khaing. "Now our only hopes rest with the students, and more and more of them are joining us."
Khaing is especially disappointed by the international community. Of course, he says, the United States has been providing the opposition with massive amounts of financial assistance for the past year, but most of the money ends up in the hands of Burmese exile groups in Thailand. Besides, Khaing adds, nothing will change unless China is put under pressure. "The Chinese defend the regime because they want to retain control over Southeast Asia. They see us a market and they are lusting after our natural gas."
Then Khaing stands up without a sound and disappears into the throngs of Rangoon, a city of six million. He doesn't like to stay in one place for more than 15 minutes.