The Russians in Georgia 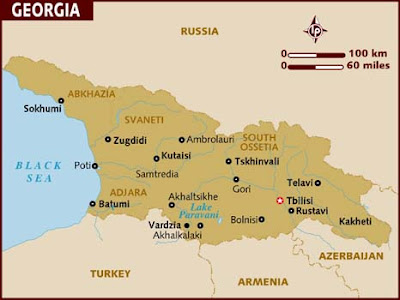 Michael Walzer has these thoughts on the Russian incursion into Georgia:

This is an unjust war. That may seem obvious here in the U.S., but the Russians have worked hard to justify their attack, using the humanitarian language that everyone now uses to defend military operations in other people’s countries. It is important to address their claims, especially because they have received some credence in Europe. It is also relatively easy to do that since reporters and human rights activists have been allowed into parts of Georgia now under Russian control. As a result, we know that the South Ossetian city of Tskhinvali has not been destroyed by the Georgian army. “Fighting appears to have been concentrated in two neighborhoods, while buildings in the rest of the city stood intact,” reports the New York Times (August 13, 2008). “Entire residential neighborhoods appear unscathed.” Nor is the Russian claim that the Georgians killed or injured 2,000 civilians credible. Human Rights Watch, checking the local hospital, has come up with the figure of 44 dead and 273 wounded in clashes between Ossetian separatists and Georgian soldiers—and one doctor told reporters that the majority of the wounded were soldiers (New York Times, August 15, 2008). The Putin government apparently believes that anything less than the Big Lie won’t be persuasive, and this Big Lie may be effective in Russia, where the government dominates the media. It shouldn’t be credited in the rest of the world. This isn’t a humanitarian intervention, and it isn’t a peacekeeping operation.

Russian intentions are not benevolent and there is every reason to believe that propped up with oil wealth they will start re-asserting the power of the old empire. The ideological force behind this move is not Communism of the old Soviet Union but nationalism of a Russian state previously humbled by the break-up of the Soviet entity and a devastated economy.

The movement of Georgian soldiers into South Ossetia was reckless, certainly, but it wasn’t the reason—it was only the excuse—for the Russian invasion. The reason lies in American policy in Eastern Europe and the former Soviet Union in the years since 1989, which the Russians have interpreted, not implausibly, as aiming at and achieving a significant reduction in their power and prestige. I don’t think that the policy was necessarily wrong, or wrong at all, but it was, like President Saakashvili’s Ossetian adventure, reckless. We never reckoned on a Russian response or planned for it or consulted with our allies about what might have to be done. Russia’s strategic aggressiveness in Georgia obviously took the Bush administration by surprise. Just like the Iraqi insurgency. Just like the return of the Taliban in Afghanistan. Just like the victory of Hamas in the Palestinian elections. Just like the fall of Musharraf in Pakistan.

Yes. The failure of intelligence has yet again blindsided the United States to see this coming in order to try to prevent this war. In fact, based upon previous statements of encouragement from the White House, Georgians seem surprised the U.S. did not rush to Georgia’s aid. The poor intelligence and empty rhetoric reflect a failure (or lack of) thoughtful policy for the region and, in particular, Russia. What policy exists seems ad hoc – just like Iraq, just like Afghanistan, just like Palestine, and just like Pakistan.

It is clear that another victim of this administration’s obsession with Iraq has been the complete neglect of East-West relations as it pertains to Russia. The world cannot afford such a lapse in attention from the next administration in Washington.

The European response has been particularly weak, and we have to worry that the weakness is due to European dependence on Russian oil—which would be greatly heightened if the pipeline across Georgia and Turkey were cut. I don’t think that the Russians invaded Georgia for the oil; I don’t think that America invaded Iraq for the oil. But oil is a factor in imperial politics, and the EU needs to think about a version of Russian domination that is commercial rather than political or military—an “empire” entirely appropriate to the twenty-first century. One response that the Russians would notice would be a large-scale campaign for conservation and a massive investment in alternative sources of energy.

Foreign policy and energy policy cannot be seen as separate. The primary source of oil is from countries whose democratic credentials are marginal at best and all too frequently are hostile to the West. Yet our insatiable demand for more and more oil – much of it wasted, for example, in gas-guzzling vehicles – only puts more wealth in the coffers of those with unfriendly intentions. There is not enough oil on U.S. (or Western) territory to offset this demand. Only energy conservation and energy diversification can do that.

You can read his entire piece here. (Hat tip to Jeff Weintraub.)
Posted by Sisyphus at 10:14 AM

Nicely put Stephen. It seems that the U.S. no longer has the market cornered on unjust wars though Putin might have lined up the U.N. to sign off on his "special" fraud on the world.

Aside from the war itself, the situation speaks volumes about the incompetency of the Bush Administration with respect to "leading" the world and reading the tea leaves in Georgia.