Is being a liar, flip-flopper, panderer, bully, and whiner a winning formula for the 2008 presidential election? John McCain seems to think so. 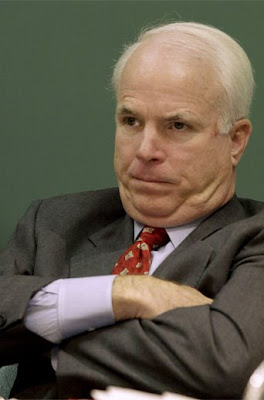 Here is Michael Tomasky’s take on the McCain candidacy:

When people start running to be president, we learn new things about them. The amount and intensity of exposure – the fact that suddenly we are subjected to their thinking on every conceivable issue and non-issue – makes this inevitable. As a result of this our opinions change. We either like them more or less than at the beginning, but rarely in just the same measure.
I've been surprised at how much less I like John McCain than I did a year ago. Granted, I think the Republican party is an affliction and, as I've made clear for a long time, I want Barack Obama to be the next president. But even given that, the political analyst part of my brain can put all that aside and see other strengths and weaknesses (and we'll circle back to this point).
John McCain is a jerk. Alternately a bully and a whiner, and a bald-faced liar to perhaps a greater degree than even George Bush and Dick Cheney, McCain is running a stupid and mephitic campaign that insults even Americans of average intelligence virtually every day.
He has pandered to the right-wing to a degree that the word "shameless" can't possibly begin to describe. He has flip-flopped repeatedly, on taxes and abortion and many other matters. And he quite obviously changed his position on offshore drilling in order to raise pots of money from oil interests. Period.
He lies with abandon. He's not an idiot, so he has to know very well, for example, that offshore drilling won't affect the price of gasoline (petrol) for many years to come. Yet he repeatedly implies or says outright to audiences that if we just opened up the coasts to drilling, prices would start to come down.
Most surprisingly of all to me, he has demonstrated over and over his lack of a grasp of, and in many cases even a passing interest in, the details of policy. Here is a man who's been a national legislator for a quarter-century. He has clearly been interested in a few things, mostly having to do with military and foreign policy, and to a certain extent energy policy. But there are dozens more realms with which responsible Solons ought to have acquainted themselves over 25 years. McCain seems to have glided through the Senate without even bothering to learn very much at all about fiscal and economic policy, healthcare, social policy (which is an umbrella rubric covering a dozen different things) and a lot of other topics. His campaign, and his partisans, accuse Obama of being a lightweight. But in truth, McCain is the policy lightweight.
And finally, on his area of supposed expertise, he's demonstrated that he would uphold the Dick Cheney tradition. He talks very tough on Iran and gives disquieting indications that he'd seriously consider a preemptive strike on their nuclear facilities, even though experts repeatedly stress that a massive strike would be required to penetrate even a small percentage of Iran's processing and storage facilities. And on Russia, his policies – force them out of the G8, are you serious? – would rekindle a new cold war with a nation that still, lest we forget, sits on upwards of 12,000 nuclear warheads (by comparison, China has 400).
And on top of all this, he runs ads featuring Paris Hilton and Britney Spears, and far worse, and then lies and denies he's running a negative campaign. He's just a joke of a candidate.
And yet, the analytical side of my brain knows that McCain has won the pre-convention summer phase of the campaign. He's cut into Obama's lead. Obama's win percentage at fivethirtyeight.com – that is, the likelihood in their estimation that he's going to win the election – has been above 60% most of the campaign. This morning it's at 56.9%. State-by-state, Obama still looks good, but enough states are close enough to make Obama partisans nervous.
More than that, the McCain campaign has established a negative story line about Obama – that he's shallow, just a celebrity, and so on – that is sticking, a little. It's a blustery lie. But blustery lies often work.
In the meantime, the Obama campaign hasn't established a negative story line about McCain. It's not an easy thing to do. His reputation, thanks to years of fawning media, is so ingrained and so at odds with the man we've seen on the trail thus far that arguing to voters that McCain is in fact a superficial flip-flopping panderer would just make no sense. And the McCain campaign would just respond, as it has, by saying, "How dare they say that about a former prisoner of war". And then the media will just talk about that all over again.
So Obama has a challenge here. An election about his alleged superficiality is a tough one for him to win. An election about what the Republicans have done to the country, and why McCain will be more of the same, is a lot easier to win. He's still ahead, but his campaign should have spent its summer vacation establishing the latter contest more forcefully.

In a desperate attempt to make anything stick to Obama, they've resorted to a kitchen-sink strategy that makes Hillary Clinton's look tame by comparison.

And yes, McCain looks like a total lightweight beholden to the status quo and an older school of politics. He's running the same style of campaign as William McKinley.

I think that John McCain is a great man and anyone that thinks he is what you write above then you simply are not logical. He has proved he can work with both parties. He has proved that his country comes first. He has proved to me he is the correct man for the job. I’m very sure he will be our next president! I support John McCain.

I totally agree with your very well-written assessment of the McCain camp and disagree with the comment before mine; however, I think his choice of a VP has shed a new light on the depths of his inanity in an attempt to find a wholesale representative of every conservative group to whom his (supposed) middle of the road conservatism has not reached. This choice, in my mind, pretty much sewed up a win for Obama. She reminds me of someone who was class treasurer at a rural high school in the 80's and never moved on. I can see the 4x4 and trampoline in the White House Rose Garden.

I'm sorry, but this choice reads like a bad sitcom script. It makes me wonder if the Republicans want to throw this election. Perhaps they know that whomever is elected to clean up the mess of the the last 8 years will face an unpopular Carter-esque presidency? I cannot fathom this choice in any other way. I want a woman in office but I want a woman with political credibility.
Nyx