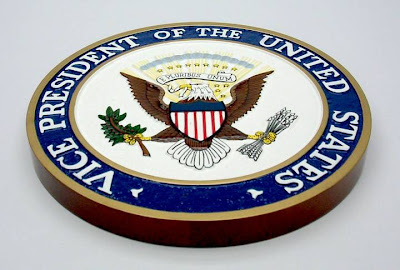 There is a frenzy of speculation about whom Barack Obama will select to join him on the Democratic ticket as the Vice President nominee. I must confess I too have signed up to receive announcement via text message and do have my own list of favorites I hope to see selected. However, beyond the immediate moment there is something screwy about the way we select Vice Presidents and even about the position itself. I’m in favor of just doing away with it.

First, a little history -- here is Joshua Spivak in a 2004 article:

… why do we even have a vice president? The position was not created to help balance an election ticket, nor was it intended to provide the president a surrogate for state funerals. Rather, it was an almost-accidental afterthought.
Under the rules of the original Constitution, each presidential elector was granted two equally weighted votes, which could not be cast for candidates from the same state. In order to make the second vote meaningful, the person who finished second would be the vice president. If the president were to be the best person for the job, then the vice president should be the second-most-capable person. What the constitutional conventioneers hadn't intended was that political parties would quickly reshape electoral politics.
By the fourth national election in 1800, the nascent party system exposed the design flaw. A tie vote between Thomas Jefferson and Aaron Burr resulted in the House of Representatives deciding the presidency. After his victory, Jefferson's Republicans passed the 12th Amendment, which required a separate vote for the president and vice president. Stripped of its original position as a job for the runner-up for the presidency, the vice presidency fell into obscurity.
Without its prestige, a mostly motley collection of third-tier politicos were chosen for the No. 2 job, primarily to gain convention support for the presidential candidate.
The rehabilitation of the office began with Harry Truman, who assumed the presidency in the waning days of World War II with almost no preparation for the immense job before him. Truman saw to it that Alben Barkley, his vice president after 1948, would be at least somewhat prepared, and he made the VP a member of the National Security Council. Subsequent presidents have added substantially to the vice president's portfolio. This has reached its apex with Cheney, who has been cited as serving in a prime-ministry role.

And this is from Mathew Yglesias earlier this week:

When you think about it, it’s exceedingly odd. The Vice President has no formal role in the conduct of government to speak of. And yet, since the end of World War II the choice of VP has been very important. Not so much because the Vice President is an important person but because no many VPs go on (Truman, Nixon, Johnson, HW Bush) to become President while others (Gore, Humphrey, Mondale) become major party nominees. Consequently, even though the office is trivial, the choice is very important. But the choice is also fairly important politically to the person who does the choosing. Therefore, “would it be good for this person to become a presidential nominee” gets relatively little consideration during the decision-making process (relative to: would s/he be a good surrogate? give me a ‘bounce’? help with a state?) even though it really ought to be the primary consideration. Beyond that, you have the “Cheney Paradox.” It seems perverse to have a Vice President who doesn’t do anything. But a Vice President who does too much becomes a destabilizing influence within the government — nobody really knows who he speaks for, and he can influence things in ways that provide for no accountability.
At the end of the day, after all, the Vice President’s core job function is simply to take over the government in case the President dies. But it would be easy enough for the line of succession to simply run through the cabinet (SecState, SecDef, etc…) rather than their being a specially designated “inaugurate in case of death” figure. The original conception of the Vice Presidency was a constitutional bug that the framers hadn’t really thought through properly, and though Amendment XII works okay as a patch, it would really be better do do away with the thing entirely.

First, we don’t elect a Vice President so much as we elect a President and his shadow. I’m not aware of any other elected position in the United States where one vote is cast for two people. Even in my home state of Virginia voters are given a choice when picking Governor and Lt. Governor – they can vote for one from one party and the other from another party. I have not done a state-by-state survey but my guess is most, if not all, states have an identical system. And even though Virginia’s Lt. Governor position is similar to the Vice Presidency in the minimal duties assigned to it (see below) at least voters have a choice.

So if voters are confronted with a solid presidential candidate but a weak vice presidential candidate (or vice versa) they can’t split their votes. Candidates for Vice President are not considered or approved independently the way members of the President’s cabinet are when they are presented to the Senate for approval. The selection system is marginally democratic at best which means accountability to the voters is only indirect if at all.

The Vice President’s two formal duties can easily be dispensed with simply taking the VP off the current list of the line of Presidential succession (defined by the Presidential Succession Act of 1947) and making the presiding officer of the Senate a member of the Senate. The tie breaking vote power of the latter would be eliminated also – ties votes on legislation simply means the legislation loses and tie votes on Senate organization means the members of the Senate need to organize themselves into a majority as any parliament around the world would do.

Third, Vice President nominees are a distraction from the election of President. This November voters will go to the polls and cast votes to either change the direction of the country or to stay the course based on what the candidates for President stand for and say – not their running mates. Yet, the running mates may hold contrary positions or say things off message that unnecessarily complicate our already Rube Goldberg-like election process under the marginally democratic Electoral College.

While I have complete confidence Mr. Obama will select a running mate who is well qualified and someone we will be proud of let’s simplify our elections and governance. Let’s abolish the Vice Presidency.
Posted by Sisyphus at 9:52 AM

John Adams, the first vice-president, was in a conundrum as to what his duties were supposed to be. He defined many of the responsibilities of the Vice Presidency, despite substantial criticism that he was too powerful.