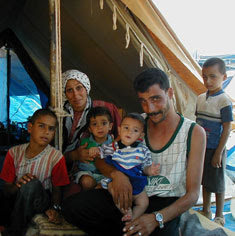 Six years after the invasion of Iraq, approximately 15% of Iraqi citizens have been displaced. Those with the means – which means often the very people with skills needed to rebuild Iraq – have fled the country. Others are displaced internally. The issue has been ignored by the Bush administration in part because the recent lull in violence has been bought, in part, at the price of ridding various communities of minority members and bringing them back might spark renewed fighting.

But while humanitarianism may be the overriding concern at this time it is not the only issue at stake. As the experience of the displaced Palestinian community proves, unresolved problems involving refugees can be a destabilizing influence in any region. Addressing the needs of Iraqi refugees is not only the right thing for the United States and the international community to do but also in everyone’s best interest.

Spencer Ackerman has this overview in the Washington Independent: