The slow strangulation of a free press in Venezuela 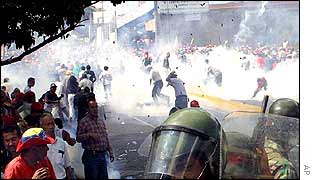 The government of Hugo Chavez has shut down RCTV – the oldest privately owned television station in Venezuela. The station, popular with Venezuelans for its soap operas and game shows, was one of a number of media outlets that has opposed the Chavez government.

Yesterday in Caracas, thousands protested the decision by Chavez to force the station off the air for being critical of his leadership. Huffington Post reports, “Police fired toward the crowd of up to 5,000 protesters from a raised highway, and protesters fled amid clouds of tear gas. They later regrouped in Caracas’ Plaza Brion chanting “freedom!” Some tossed rocks and bottles at police, prompting authorities to scatter demonstrators by firing more gas.”

According to José Miguel Vivanco, Americas director at Human Rights Watch, “President Hugo Chávez is misusing the state’s regulatory authority to punish a media outlet for its criticism of the government. The move to shut down RCTV is a serious blow to freedom of expression in Venezuela.”

Marc Cooper addresses the issue of the apologists for Chavez’s actions:

… RCTV is no doubt a conservative, anti-Chavez, pro-oligarchic network chock full of mind-numbing and frankly stupid entertainment programs. But you know what? Millions of Venezuelans watch them, want to watch them, and much more importantly -- like it or not-- RCTV has become the major media outlet for the political opposition. And excuse me for being old-fashioned but without a strong opposition voice there is no such thing as democracy-- of the revolutionary sort or otherwise.
The question from the apologists is always: Well, would the U.S. allow a TV station that encouraged the overthrow of the government. I suspect not. But we would sure be protesting someone's right to encourage that? Wouldn't we? And at least there'd be some damn FCC hearing with a right to appeal before the troops were sent in to seize the equipment.
What really galls me -- no, what absolutely disgusts me-- are the so-called "media reformers" in the U.S. who just think it's grand when Chavez engages in this sort of muzzling. They want to stand with an authoritarian who, among other things, has said he's closing RCTV because its soap operas encourage immoral behavior? Roll over, Reverend Falwell and make room for your new lefty friends.
The most obvious lesson that anyone with an IQ above room temperature can draw from these events is that the closure of RCTV is but a direct threat to any other opposition voice in Venezuela. The two other private TV networks in Venezuela behaved exactly the same way that RCTV did during the 2002 failed coup against Chavez (they supported it). But in the past few years they have modified their political positions to supporting Hugo, so their billionaire owners continue with no restriction.
Here in the U.S. we journalists get understandably upset when as much as one reporter gets dragged before a grand jury. We rightfully consider that a chilling of press freedom. But how is that the phony media reformers -- like FAIR-- can't raise their voices when a major opposition network is yanked off the air and it supporters are fired on with rubber bullets? This all gives a new meaning to the word hypocrisy.

And now it is reported that the Chavez government is now ratcheting up criticism of another television station, Globovision, it considers part of the opposition. It claims the station implicitly called for Chavez’s assassination when it aired footage of the 1981 assassination attempt against Pope John Paul II with the song "This Does Not Stop Here" sung by Ruben Blades, now Panama's tourism minister.
What we are witnessing is the step-by-step shut down of dissent against the government by intimidation and regulatory control of the media.
Posted by Sisyphus at 9:54 AM

One should avoid knee-jerk reactions like this article. This is the bind that reactionary pro-US forces put any left wing government in. The corporate media is used to whip up hatred against a progressive govt in preparation for overthrowing it. Corporate capitalists expect us to be a "loyal opposition" but never practices this themselves. This is exactly what happened in Chile in 1973 and again in Nicaragua in the 1980's. The progressive govt has two choices - to allow the reactionary media to exist - and face counter revolution - as in the cases sighted above, or like Cuba in 1960 or Venezuela today - shut them down. In this latter case, of course, the progressive govt is then deemed "authoritarian" and hostile international propaganda is thus generated. In both cases UIS imperialism manages to win against a popular government.However the REAL test of how "authoritarian" a progressive regime is, is not how they treat the corporate Quislings but how they treat the critical left-wing media. Cuba failed this test in 1961, so far Venezuela has not, as anarchists and Trotskyists are still free to publish their critiques of the Chavistas. However, the state closing media is a poor way of dealing with the problem, I agree. A better way would be to allow the people to take it over - to de-corporatize it and turn it into a cooperative. In essence, there should be no such thing as "corporate media" - freedom of press is for individuals, not fictitious entities like corporations.

RCTV was not forced off the air. Their license ran out and was not renewed.

Radio and TV stations need to be licensed because there are only a finite number of electromagnetic frequency bands available. Stations should not be delicensed because of their content. That is abridgement of freedom of speech. To me, it seems that the Venezuelan government did not renew the license because it wanted to suppress its voice.