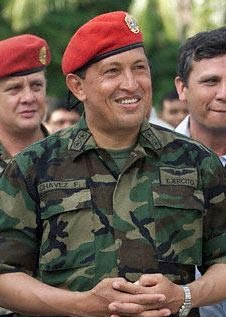 Tens of thousands of demonstrators in Caracas yesterday denounced President Hugo Chavez’s vow to shut down RCTV by not renewing its license which expires at the end of May. RCTV, along with other major newspapers and television stations in the country have supported opposition to Chavez, particularly during an attempted coup in 2002 and the general strike between December 2002 and April 2003.

During the 2002 coup against Chavez, which was led by business and military leaders, opposition channels showed cartoons and films while massive crowds of Chavez's supporters mobilized for a counterattack.
Since then, Chavez has accused private television channels of manipulating the news.
But on Saturday, while opposition channel Globovision showed tens of thousands of protesters swelling the streets, Venezuelan state television showed empty roads and groups of five or 10 protesters walking to the march.

Despite the tit-for-tat selective coverage by the private media versus the state run television many see the move by Chavez as an attempt to tighten the grip on information available to the public. Jose Miguel Vivanco, Americas director for Human Rights Watch, said, "The RCTV case is clearly a case of censorship and the most grave step back in the region since Fujimori”, referring to widespread manipulation of the media by Peruvian President Alberto Fujimori in the 1990s. "Chavez is not renewing the concession to punish a medium for its opposition to the government."

Tens of thousands of Venezuelans have rallied in the streets of Caracas to protest against President Hugo Chavez's plans to close a private TV station.
The head of the RCTV station addressed the marchers, urging them to defend freedom and "free independent media".
President Chavez has said he will not renew a licence for the RCTV network which is due to expire on 27 May.
He accuses the opposition-allied TV station of supporting a failed coup against him in 2002.
He has referred to opposition television stations in general as "horsemen of the apocalypse" and has blamed RCTV in particular for spreading immorality with its steamy soap operas.
Mr Chavez plans to replace RCTV with a government-funded TV station.
Marcel Garnier, RCTV's managing director, told a crowd of cheering protesters in Caracas that Mr Chavez was trying to "topple the country over the precipice of totalitarianism where not even his own supporters can express their opinions".
He said the president should pay more attention to the words of Simon Bolivar, a hero of Mr Chavez famed for leading South Americans in the fight against colonialism.
"He who rules must listen, the people are speaking," Mr Garnier said, quoting Bolivar.
President Chavez was re-elected by a landslide last year.
His welfare spending programme has won him massive support among the poor but his opponents accuse him of turning the country into an increasingly authoritarian socialist state, modelled on Fidel Castro's Cuba.

Chavez is a career military officer who attempted to overthrow the Venezuelan government in 1992. After serving two years in prison for his role in the attempted coup he ran for President and was elected in 1998. He was re-elected in 2000 and 2006 and survived a recall vote in 2004. He is something of a populist caudillo reminiscent of Juan Peron.
Posted by Sisyphus at 4:48 PM

RCTV is not being shut down for simply opposing Chavez - as those articles seem to imply.

It is not having its license renewed because it actively participated in the April 2002 coup against the government. Have you ever watched what it broadcast during that time. During the evening of April 11th as the coup was underway they had the officers leading the coup in RCTVs studios broadcasting orders over the airwaves and calling on military units not involved with the coup to surrender. And during the opposition march to the Presidential palace to overthrow the government (the illegal act that served as the catalyst for the coup) RCTV kept encouraging the march and had a sign on the bottom of the screen the whole time - Ni un paso atras, not one step back.

If CBS, CNN, or BBC ever acted in a similar manner I think it is safe to say that would be the end of them too.

NPR's On the Media ran an informative story about this on the most recent episode.