Gays in the military: If it’s a nonissue for the British, why not us? 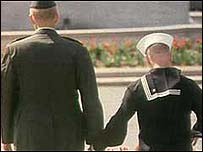 This is from today’s New York Times:

Since the British military began allowing homosexuals to serve in the armed forces in 2000, none of its fears — about harassment, discord, blackmail, bullying or an erosion of unit cohesion or military effectiveness — have come to pass, according to the Ministry of Defense, current and former members of the services and academics specializing in the military. The biggest news about the policy, they say, is that there is no news. It has for the most part become a nonissue.

If it is a nonissue for the Brits, why isn’t it a nonissue for the U.S.? Most of our allies permit gay and lesbian citizens to serve their country in the military. The United States is in company with the likes of North Korea, Saudi Arabia, Syria and Cuba in its homosexual ban on openly serving in the military. Isn’t it time we got on the right side of this issue?
Posted by Sisyphus at 4:01 PM