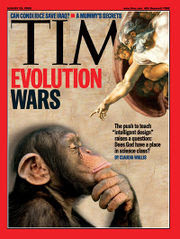 The Chesterfield County, Virginia School Board is looking for a way through the back door to allow the promotion of Intelligent Design as a science.

The stage is set for a big debate over students’ textbooks in Chesterfield. The controversy centers on new science books and whether they should teach Intelligent Design.
The debate started back in April when parents reviewed the textbooks. At least 50 parents expressed concern that the books only included evolution and not Intelligent Design.
The school board got involved in the discussion, which led to another discovery. The board concluded that there are no textbooks or supplements available that include Intelligent Design.
One, the law doesn’t allow teachers to teach it. Two, it cannot always be neutral religious topic. What to do? The school board thinks it may have the answer.
“We’re not driving what students can do based on curriculum,” said Thomas Doland, chairman of the school board. “A student can individually explore, research and report on things that are important to them that may be controversial, but they are doing it on their own interest.”
To make sure students can do just that with no issue, the board is working on writing and adopting that policy.
Before all of that happens, board members will want to hear from you. The school board will hear about the issue in a meeting at 7:30 p.m. Tuesday at the public meeting room in Chesterfield.
The school board hopes to have a plan in place before students go back to school in the fall.

While it may be a step forward for Chesterfield County if the school board adopts a policy that students “can individually explore, research and report on things that are important to them” the reality is the board is caving in to those who want to use the public school system to promote their particular religion. Maybe they will take the kids on field trips to the Creationist Museum.

Intelligent Design (a.k.a. ID) is the notion that “certain features of the universe and of living things are best explained by an intelligent cause, and not an undirected process such as natural selection.” The “intelligence” of course is supernatural and not provable but by promoting it as a scientific theory and alternative to evolution and the theory of natural selection a segment of Christians is using ID to try and sneak their religion into the public schools. The ID movement is also referred to as “Neo-Creationism” and is distinguished from Creationism in that it generally does not rely on scripture as proof. Regardless, it is widely viewed as a pseudo-science promoted by Christian conservatives who have attempted to impose their idea of the supernatural on school children.

This comes at a time when a proponent of teaching children intelligent design as science is running unopposed for president-elect of the National Association of State Boards of Education.
Posted by Sisyphus at 3:38 PM

How dare Chesterfield County -- Let children explore the things that interest them. Hopefully, your kids will not be hearing the book report on the book of Genesis.

It is interesting that Chesterfield has to adopt a policy to let kids explore what interests them. That says a lot about Chesterfield schools.

Book report on Genesis? That's great. The kids are free to say what they please because they are not agents of the state. School officials are and that's why they must remain neutral. However, I have my doubts about how many book reports there will be on Genesis if this is to truly represent what interests the kids and not what they are prodded into by authority figures. And remember the goose and the gander rule applies. Let's see how how supportive of freedom of expression some of these folks are when kids start doing reports on atheism, paganism or Wicca.

Things in Virginia amazed me from time to time!

I think its a good move for Chesterfield -- it's a policy change to protect the teachers/administration - so that a child may do something as give a book report on Genesis or Wicca, or atheism. It also gives the child the same right to research creationism at school to compare to what is being taught -- which is evolution -- which is just a theory...

Thank goodness for the brave parents of Chesterfield County! At last, the true origin of life, the universe, and everything will be taught to our children!! Finally, the guiding noodly appendage of the FLYING SPAGHETTI MONSTER will take its rightful place in our science classrooms!!!

Anon at 12:53 says creationism is ok because evolution is "just a theory".

I suppose gravity is just a theory, as well, or whether 2+2=4, or whether the earth revolves around the sun. Anon would surely agree that the last one is obviously questionable; everyone knows the sun rises in the east and sets in the west proof positive of the theory that the earth is the center of the universe and all existence stems from God's word as reported, no doubt accurately, in the Bible. I'm a former resident of Chesterfield County, and proudly emphasize the former part. What a bunch of know-nothings.