Memorial Day and the dealth of a son 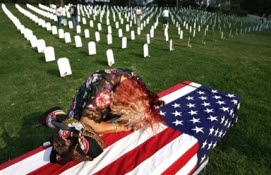 This Memorial Day speeches will be given honoring our nation’s war dead – the soldiers and sailors who made the ultimate sacrifice in the name of democracy. This Memorial Day it may be worth considering not only how these brave men and women served their country but how their government served them.

Andrew J. Bacevich graduated from West Point in 1969 and served in Vietnam in 1970 and 1971. He continued in the military retiring as a Colonel in the early 1990’s. He earned his Ph.D from Princeton University in the history of American Diplomacy and has taught at West Point, John Hopkins University and Boston University. Bacevich has been a conservative critic of Bush foreign policy particularly as it pertains to Iraq.

His son, by the same name, followed his father’s career path into the military. He was stationed in Iraq. The family was notified on Mother’s Day that First Lt. Andrew J. Bacevich, 27, had been killed by a bomb while on patrol in Balad, Iraq

Here are Mr. Bacevich’s reflections following the death of his son:

What exactly is a father's duty when his son is sent into harm's way?
Among the many ways to answer that question, mine was this one: As my son was doing his utmost to be a good soldier, I strove to be a good citizen.
As a citizen, I have tried since Sept. 11, 2001, to promote a critical understanding of U.S. foreign policy. I know that even now, people of good will find much to admire in Bush's response to that awful day. They applaud his doctrine of preventive war. They endorse his crusade to spread democracy across the Muslim world and to eliminate tyranny from the face of the Earth. They insist not only that his decision to invade Iraq in 2003 was correct but that the war there can still be won. Some -- the members of the "the-surge-is-already-working" school of thought -- even profess to see victory just over the horizon.
I believe that such notions are dead wrong and doomed to fail. In books, articles and op-ed pieces, in talks to audiences large and small, I have said as much. "The long war is an unwinnable one," I wrote in this section of The Washington Post in August 2005. "The United States needs to liquidate its presence in Iraq, placing the onus on Iraqis to decide their fate and creating the space for other regional powers to assist in brokering a political settlement. We've done all that we can do."
Not for a second did I expect my own efforts to make a difference. But I did nurse the hope that my voice might combine with those of others -- teachers, writers, activists and ordinary folks -- to educate the public about the folly of the course on which the nation has embarked. I hoped that those efforts might produce a political climate conducive to change. I genuinely believed that if the people spoke, our leaders in Washington would listen and respond.
This, I can now see, was an illusion.
The people have spoken, and nothing of substance has changed. The November 2006 midterm elections signified an unambiguous repudiation of the policies that landed us in our present predicament. But half a year later, the war continues, with no end in sight. Indeed, by sending more troops to Iraq (and by extending the tours of those, like my son, who were already there), Bush has signaled his complete disregard for what was once quaintly referred to as "the will of the people."
***
Memorial Day orators will say that a G.I.'s life is priceless. Don't believe it. I know what value the U.S. government assigns to a soldier's life: I've been handed the check. It's roughly what the Yankees will pay Roger Clemens per inning once he starts pitching next month.
Money maintains the Republican/Democratic duopoly of trivialized politics. It confines the debate over U.S. policy to well-hewn channels. It preserves intact the cliches of 1933-45 about isolationism, appeasement and the nation's call to "global leadership." It inhibits any serious accounting of exactly how much our misadventure in Iraq is costing. It ignores completely the question of who actually pays. It negates democracy, rendering free speech little more than a means of recording dissent.
This is not some great conspiracy. It's the way our system works.
In joining the Army, my son was following in his father's footsteps: Before he was born, I had served in Vietnam. As military officers, we shared an ironic kinship of sorts, each of us demonstrating a peculiar knack for picking the wrong war at the wrong time. Yet he was the better soldier -- brave and steadfast and irrepressible.
I know that my son did his best to serve our country. Through my own opposition to a profoundly misguided war, I thought I was doing the same. In fact, while was he was giving all, I was doing nothing. In this way, I failed him.

You can read the entire piece here.

Young Bacevich died from a suicide bomber from one of the many groups of enemies we are facing in Iraq – we’ll probably never know which one is responsible for that particular bomber on that particular road because Iraq has become a multitude of different conflicts fought between different parties. Yet, at different level we do know who is also responsible for his death and others – it is the national leadership of this country and a system of government that has become stagnant.

The system is structured so that two parties have a monopoly on power – third parties just don’t make sense under this system. And it’s not that there is no difference between the parties – there is – but there isn’t enough of a difference to make significant changes in the lives of Americans when they vote for one over the other. It is of little wonder that our elections focus on the race rather than what lies beyond the finish line. And it is also of little wonder that the turnout of registered voters is so embarrassing low.

The separation of the legislative and executive branches of government (unlike a parliamentary system) can result in a gridlock with the executive branch always holding the upper hand because the sitting President is only accountable to the Electoral College once at the end of the first four-year term and essentially has tenure. When a sitting President is less than competent and is surrounded by ideologues the result is something like we are facing now in Iraq.

The current policy for Iraq is a failure. The tyrant was toppled only to be replaced by chaos and civil war. It is not clear what exactly the proper thing to do in Iraq is given the growing humanitarian crisis and the country quite possibly on the verge of collapse. We hear little about these important issues. There are long term U.S. strategic interests in the region particularly as it pertains to the very real threat from Al Qaeda but that discussion has become as muddled in clichés as to be almost meaningless. Debates seem to lack substance and weave in and out of non-arguments as to whether we are supporting the troops or not as if the war is being fought for the benefit of the troops or the troops are helpless children in need of protection.

It’s an old saying that armies don’t fight wars, nations do. But look around and you don’t see a nation at war. Democracy provides legitimacy for government actions and buy-in by the public. It also helps clarify policy. But the American public has either not bought into this war or, if they did, they now want out. Yet, nothing changes. The system that is supposed to be democracy is failing. It is failing because it has become just a façade of a democracy. It seems that more and more of what we do is just going through the motions of voting that produce only marginal changes.

First Lt. Andrew J. Bacevich and the other allied service people as well as the countless Iraqi citizens who have died deserved better. That’s what we should remember this Memorial Day.