Chatham House: Iraq on verge of “collapse and fragmentation” 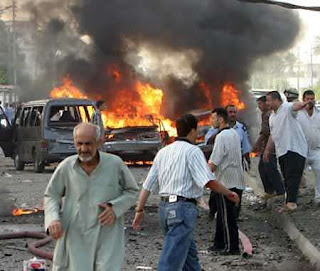 The British foreign policy think tank, Chatham House, has issued a report stating Iraq is on the verge of becoming a failed state. It argues that the conflict is not a single insurgency or civil war but multiple wars going on at the same time between different communities and groups. Its assessment of the Iraqi government is that it has lost control of large sections of the country. It argues that the “surge” is not succeeding and the influence of Al Qaeda is spreading despite challenges by local groups.

The report states that Iraq’s three major neighbors – Iran, Turkey and Saudi Arabia – all have their own reasons in favor of the continuing instability in Iraq and use different methods to influence developments there. It makes a case that the government must be expanded to include greater representation of Sunni Arabs and recognize Muqtada al-Sadr as a legitimate political partner rather than an enemy. While it urges U.S. diplomacy with Iraq’s neighbors be intensified it argues Iraqi solutions must be found to Iraqi problems and the imposition of U.S. or regional solutions will only destabilize the situation further.
This from Der Spiegel:

Iraq is a long way away from stabilization.
It hardly qualifies as breaking news anymore when a think tank comes out with a report saying that Iraq is in trouble. But rarely has a study been as scathing as that released on Thursday by the widely respected British foreign policy organization Chatham House. Iraq, the report says bluntly, is on the verge of "collapse and fragmentation."
The report argues that it is time to take a sober look at the realities in the country four years after the US-led invasion and to model future policy on a true understanding of the challenges presented. And according to the study, those challenges are many: the existence of multiple civil wars in the country between many different actors; a fracturing of the country into regional power bases; control of oil; a ripping apart of the social fabric; and the lack of authority in the hands of the Iraqi government among other, equally vexing problems.
"It is time for a full appraisal of the realities in Iraq," author Gareth Stansfield writes. "On current evidence, these realities are very disturbing and it can no longer be assumed that Iraq will ultimately survive as a united entity.... Iraq's attempted transition from dictatorship to democracy has been harrowing and multi-faceted violence appears likely to continue and intensify. It can be argued that Iraq is on the verge of being a failed state which faces the distinct possibility of collapse and fragmentation."
Chatham House's assessment of Iraq comes on the same day that the US Ambassador to Iraq, Ryan Crocker, offered up his own, much more optimistic viewpoint. While he admitted that the country was consumed by violence, he said that he was encouraged that Iraq seems to be moving away from the widespread sectarian violence of a year ago.
"If I had to evaluate today, and looking purely at the security situation, as devastating as the al-Qaida-led chain of suicide vehicle attacks is, that does not in my mind suggest the failing of the state or of society," Crocker told reporters in Baghdad. US military spokesman Maj. Gen. William Caldwell told the BBC that he also thought that the US troop surge in Baghdad was making progress toward bringing violence levels down in the Iraqi capital.
The report from Chatham House, however, bluntly states that "the surge is not curbing the high level of violence." It also warns that the security situation cannot be drastically improved in the short term and that it should instead "be considered within a timeframe of many years."
A primary reason for the intractability of the security situation, the report argues, is the myriad different conflicts that are being played out on the streets of Baghdad each day. Among the numerous "civil wars" the report identifies are:
The report also recommends that the US intensify diplomacy with neighboring states -- on the same day that Iran announced that the Iranians and Americans have agreed to a meeting on the Iraqi security situation on May 28. During a visit to Pakistan, Iranian Foreign Minister Manouchehr Mottaki said that the talks would focus exclusively on Iraq.

Your can read the report (a .pdf file) here.

This is an important assessment of the situation. Unless there is a sincere appreciation for the complexity of the situation on the ground – in particular the recognition there is not a single insurgency or war going on but multiple mini-wars that sometimes overlap – there cannot be any realistic movement towards lasting stability.

Der Spiegel also published an interview with Stephen Biddle, a Senior Fellow at the Council of Foreign Relations and currently a Fellow at the American Academy in Berlin, who has recently returned from Iraq. He states that the strategy the United States is using in Iraq is for a classical insurgency. The problem is what is happening in Iraq is not a classical insurgency – usually a battle over ideas – but a complex communal civil war fought for survival in which Al Qaeda is a symptom, not a cause.

He says there needs to be negotiation between warring parties in Iraq and there needs to be a policing of the conflict by a neutral force. The problem with the Iraqi military forces is that they are seen as one side in the conflict that will lash out against the Sunni community once the Americans leave. Biddle argues that the “we’ll stand down when the Iraqi army stands up” rhetoric is a prescription for failure – the National Iraqi Army is simply not trusted and seen by the Sunni community as an extension of the Shiite militias. There needs to be a neutral enforcer of any ceasefire achieved and, according to Biddle, there is no good candidate available other than the United States. He sees a U.S. presence in Iraq for years.

Aside from the initial success of overthrowing Saddam Hussein, U.S. strategy (or lack of it) since the overthrow has been a failure. The deterioration of the Iraqi state, at best, happened unnoticed under the noses of U.S. authorities and, at worse, was at least partly a result of U.S. strategy. The problem with the “surge” aside from being too little too late is it is an attempt to undo years of deterioration of the Iraqi state. The damage is done and that reality must be recognized. Aggressive diplomacy with all of Iraq’s neighbors and negotiations between warring parties must begin immediately. Yet, little is happening.

The policy and strategy must change The American people have made it quite clear they do not support the current failed policy. However, there is little discussion about any alternatives to either the status quo or withdrawing.
Posted by Sisyphus at 9:18 AM

Spot on as usual

The question is who else is there to maintain order.

Say the U.S. leaves who would take our place. U.N. no way.

NATO? possibly but are they really neutral. I think NATO is the best option out of a series of terrible options.

I guess we could always leave and back a side much like Regan did in central america. or try containment. There are flaws with both of these strategies as well.