The murals of Baghdad 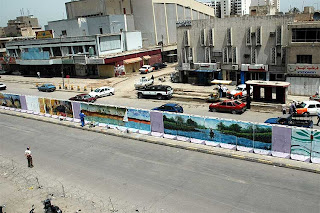 Talk about making the best you can out of a horrible situation, the concrete barriers erected by U.S. forces to separate Sunni and Shiite neighborhoods are being used by local artists for giant murals. It is inspiring but very sad at the same time.

This is the story from Der Spiegel:

The erection of protection walls in Baghdad has proved highly controversial -- but for a group of artists they have provided novel giant canvases. For the last month the muralists have been turning the gray concrete blocks into vivid works of art -- and hoping to bring a bit of joy to the lives of Iraqis.
Baqir al-Sheik is a man with a colorful vision for his hometown. His ambition is to turn the concrete walls that divide Baghdad into giant canvases. The Iraqi artist wants to remind people of the history and beauty of his country. "Hopefully it will remind some people that there is good news in this country, not all bad," the painter told USA Today.
Al-Sheik and around 40 other artists began a painting spree back in April covering the concrete walls that divide the city with huge colorful murals. The painters are happy to finally have something to do in this dusty war-torn city -- and the people of Baghdad appreciate the change of scenery as well.
The protection walls provoked fierce debate last month when US forces began to cordon off the entire Sunni neighborhood of Adhamiya on April 10 to prevent clashes between Shiites and Sunnis, but as soon as criticism of the walls erupted in Baghdad, Iraqi Prime Minister Nouri al-Maliki ordered a halt to construction.
Adhamiya is not an isolated case in Baghdad -- entire sections of the city have been walled off for miles with tall "Bremer walls," named after Paul Bremer, the former US civilian administrator, who laid the groundwork for Baghdad as a concrete city four years ago with the construction of the "Green Zone."
"We can't remove those walls anytime soon," al-Sheik explained "We may as well try to beautify them." The original idea to spruce up the walls came from an international non-profit organization, which had plans to paint the 3.5-meter (12-foot) high concrete blocks in one bright color. When al-Sheik heard about the plan he contacted the organization and suggested the mural project. They liked the idea and gave him $10,000 dollars (€7.400) to make it happen.
Since April 4 the group of artists -- which includes Sunnis, Shiites and Kurds -- have been out on the streets, painting rural landscapes, portraits of fishermen and farmers or historical scenes. Their first murals are being painted on the concrete blocks surrounding the Baghdad Hotel, and other walls are due to follow as long as the money doesn't run out.
One of the artists, Talib Muhsin, told Associated Press that the project had two goals: "We are trying to help Iraqis to coexist with these concrete barriers and accept them in their life as de facto and can't be moved -- at least for the time being," he said. And he added: "We Iraqi artists wanted to say that Iraqis are like other communities who love peace and want to get rid of this situation to live normal life."
Al-Sheik told USA Today he hoped Iraqis will find a sense of optimism in the colorful murals. "They need some joy in their life, because it's decreasing day by day."