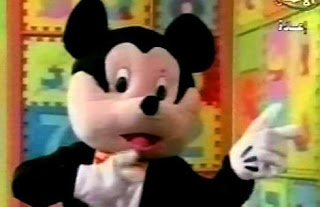 The video below is of a children’s program run on the Hamas affiliated television station al-Aqsa TV until yesterday. The Mickey Mouse impersonator urges children to fight Israel and for world wide Islamic domination.

This is from Der Spiegel:

A children's show which airs each Friday on al-Aqsa television, a station run by Hamas which broadcasts in the Palestinian Territories, now employs a singing, squeaking, dancing mouse named Farfour to connect with young viewers. But despite having a name that means "butterfly," Farfour is clearly a Mickey Mouse rip-off. The only difference being that this rodent is doing his best to transform show viewers into rifle-toting Islamist Mouseketeers.
"The people firmly stand, singing this to you. ... Its answer is an AK-47. We who do not know fear, we are the predators of the forest," Farfour squeaks in one episode while miming the throwing of a grenade and the shooting of a rifle. In another, his mousey voice warns: "Oh Jerusalem we are coming. Oh Jerusalem, it is the time of death. Oh Jerusalem, we will never surrender to the enemy, and we will never be humiliated. It is beloved Palestine that taught us what to be. And taught us to be soldiers of the Lord."
The show, called "Tomorrow's Pioneers," is hosted by a little girl named Saraa -- wrapped in a headscarf -- who does her part to indoctrinate her viewers, saying in one episode that "I remind you that al-Aqsa and the prisoners are a responsibility on our shoulders, and Allah will ask us on Resurrection Day what we gave for their sake."
Israel has reacted strongly to the show. An Israeli group which monitors Palestinian television, Palestinian Media Watch, told the AP that the Mickey clone "takes every opportunity to indoctrinate young viewers with teachings of Islamic supremacy, hatred of Israel and the US, and support of 'resistance,' the Palestinian euphemism for terror."
An official in Prime Minister Olmert's office, David Baker, told the Associated Press: "There is nothing comic about inciting young generations of Palestinians to hate Israelis."
Aside from the dancing mouse, though, it's hard to imagine the show being particularly attractive to young viewers. Hostess Saraa doesn't skimp on the political indoctrination, and the mouse frequently admonishes viewers to observe their religious duties, like praying five times a day, as a "cornerstone" for Islamic world domination.
Ironically, though, children who watch "Tomorrow's Pioneers" might learn to rattle off the names of world leaders better than those who grew up with the real Mickey. "We will win, Bush!" Farfur squeaks at one point. "We will win, Condoleezza! We will win, Olmert! We will win Sharon!" Farfur pauses after mentioning the former Israeli prime minister who has been in a coma for over a year. "Ah, Sharon is dead," he says.

According to an Associated Press story, the show was pulled from line-up of the Hamas affiliated television station al-Aqsa TV and “placed under review” after publicity of the program caused an international uproar. The program had been opposed by the Palestinian Broadcasting Corporation controlled by Fatah, a Hamas rival.

The indoctrination of children is nothing new, particularly on the al-Aqsa television station on the West Bank. Previously reported (here and here) has been the use of the young children of Rim al-Riyashi (a.k.a. Reem Riyashi), a female suicide bomber, to promote hatred and the cult of death. This is in notable contrast to the joint Israeli-Palestinian production of Sesame Street to promote tolerance to the children on both sides of that conflict.
Posted by Sisyphus at 8:35 AM

American cartoons and television may be a little more subtle, but they do the same thing.