The science of beer goggles 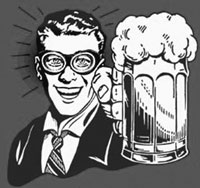 Is beauty in the eye of the beholder or the beer holder? It may be true for both but especially the latter. The phenomenon known as “beer goggles” is well known to enhance the attractiveness of certain people at bars and parties. Now scientists have determined that the amount of beer consumed is not the only factor in play and have devised a formula to determine the degree beer goggles is kicking in.

Scientists believe they have worked out a formula to calculate how "beer goggles" affect a drinker's vision.
The drink-fuelled phenomenon is said to transform supposedly "ugly" people into beauties - until the morning after.
Researchers at Manchester University say while beauty is in the eye of the beer-holder, the amount of alcohol consumed is not the only factor.
Additional factors include the level of light in the pub or club, the drinker's own eyesight and the room's smokiness.
The distance between two people is also a factor.
They all add up to make the aesthetically-challenged more attractive, according to the formula. The formula can work out a final core, ranging from less than one - where there is no beer goggle effect - to more than 100.
Nathan Efron, Professor of Clinical Optometry at the University of Manchester, said: "The beer goggles effect isn't solely dependent on how much alcohol a person consumes, there are other influencing factors at play too.
"For example, someone with normal vision, who has consumed five pints of beer and views a person 1.5 metres away in a fairly smoky and poorly lit room, will score 55, which means they would suffer from a moderate beer goggle effect."
The research was commissioned by eyecare firm Bausch & Lomb PureVision.
A poll showed that 68% of people had regretted giving their phone number to someone to whom they later realised they were not attracted.
A formula rating of less than one means no effect. Between one and 50 the person you would normally find unattractive appears less "visually offensive".
Non-appealing people become suddenly attractive between 51 and 100. At more than 100, someone not considered attractive looks like a super model.