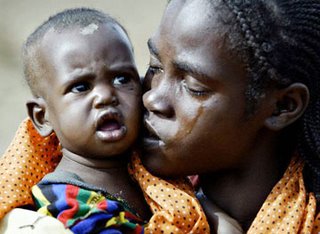 Jan Egeland, who steps down next week as the U.N. humanitarian chief, says the conflict in Darfur has spread into neighboring eastern Chad and northern Central African Republic. He says the area is in “free fall” with six million people facing starvation and lack of security.
According to the Associated Press:

More than 200,000 people have been killed and 2.5 million displaced in the fighting, and the violence has only increased since the government and one rebel group signed a peace agreement in May.
The U.N. is evacuating its international staff and the assets it can at the moment because of the intensifying violence and insecurity, "but we're not protecting the lives of the vulnerable women and children, and there are four times more of them now than when we started in 2004," he said.
Egeland, who was the first to call Darfur the world's worst humanitarian emergency in November 2003, said that one of his greatest regrets is that key global leaders did not come together and offer the sticks and carrots to settle the conflict in 2004 when it only involved one million people.
"In the end, we only acted through the humanitarian way," Egeland said. "We have kept people alive, but we haven't protected them, and as I'm going out, I regret to say we're in a free fall again."
Where is the free fall going?
"We would get a genocide. We would get a Rwanda. We could get a terrible situation if the four million people who are in need of humanitarian assistance in Darfur (are) joined by a million people in Chad and another million in northern Central African Republic. That's six million people in a totally hopeless situation."
Egeland recalled that the women and children he met during his recent fourth visit to Darfur thanked him for the food but pleaded for security. With the humanitarian operation collapsing in many places, he said, they will have nothing.
In a farewell speech on Monday to the U.N. Security Council, Egeland accused world leaders of failing to live up to a pledge made at a U.N. summit in September 2005 to protect civilians caught in armed conflict from genocide, war crimes and ethnic cleansing. A Security Council resolution adopted in April reaffirmed their agreement.
Egeland said he does not want a world police force led by one of the big powers to go into countries at gunpoint and try to protect civilians, because that could lead to an even worse situation.
"But what I do expect is that China, the United States, Russia, the European Union the leaders come together and say we're going to push and pull and provide sticks and carrots until it changes," he said.
"If we had had that for Darfur, from China to the United States and everything in between, we would have had a different situation," Egeland said. "But there was never this kind of a coherent situation."