The make-believe “war on Christmas” 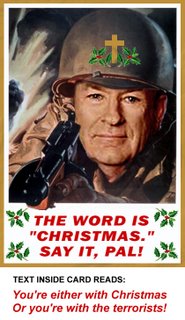 We all (or, at least most of us) know that Santa Claus is make-believe. We also know that despite that fact, the myth of Santa Clause serves a purpose of epitomizing the spirit of giving during the holiday season.

The same can be said about the so-called “war on Christmas.” It is make-believe but it serves a purpose. The difference between the Santa Clause myth and this Christmas war myth is that the former is geared to bring out the best in people whereas the latter is geared to bring out the worse. The purpose of the war-on-Christmas myth is to create anger and mistrust and to feed the paranoia present on the right-wing fringes of American society.

Dan Radmacher, the editor of the editorial page of the Roanoke Times, wrote a very good column last week in his paper about the subject. He has come under attack by the hyena of fringe politics, Bill O’Reilly, who just happens to be mentioned in the column. Here is what Mr. Radmacher wrote:

I remember a time when people of faith bemoaned the over-commercialization of Christmas.
Now some are shouting persecution because sales clerks at some stores are wishing customers "Happy Holidays" instead of "Merry Christmas" or because the tree behind the City Market building was called a holiday tree in press releases instead of a Christmas tree last year.
When it comes to persecution, Christians have come a long way from being fed to the lions, my friends.
All this "War on Christmas" nonsense was manufactured in 2004 by that sanctimonious hypocrite Bill O'Reilly to bump up ratings -- and maybe distract attention from that whole unfortunate sexual harassment/phone sex episode.
He and Sean Hannity teamed up to try to browbeat Macy's, Target, Wal-Mart and other retailers into shouting, "Christmas! Christmas! Christmas!" at their customers until everyone feels the love of Jesus deep in their eardrums.
More recently, they've been singling out retailers who trumpet "Holiday sales" rather than "Christmas sales" in advertisements.
Amusingly enough, last year O'Reilly and friends got busted red-handed selling "holiday" ornaments on the Fox News Web store. The blurb for one ornament even said, "Put your holiday tree in the 'No Spin Zone' with this silver glass 'O'Reilly Factor' ornament."
Whose side are you on, Bill?
I'll admit that I find it silly to refer to "holiday trees." However, those who pride themselves on being good Christians might realize that the Christmas tree is pagan in origin, and that the Bible criticizes the practice: "For the customs of the people are vain: for one cutteth a tree out of the forest, the work of the hands of the workman, with the axe. They deck it with silver and with gold; they fasten it with nails and with hammers, that it move not" -- Jeremiah 10:3-4.
But what's so wrong with "Happy Holidays" as a season greeting? The word holiday, after all, is derived from holy day.
More to the point, what is un-Christian about taking a little extra care not to make a non-Christian feel excluded this time of year? You don't love your neighbors by rubbing their faces in beliefs they do not share.
But the biggest reason many Christians like me can't get agitated about the so-called "War on Christmas" is that there is so little evidence that such a war is happening.
Christmas decorations started going up in the malls before Halloween, for heaven's sake.
Last I looked, Christmas retained its status as a federal holiday. Christmas specials still fill the airwaves
And in a nation where, as O'Reilly likes to point out, something like 90 percent of the population celebrates Christmas in one fashion or another, I don't believe a war on Christmas is even possible.
Other than a pathetic attempt to boost O'Reilly's ratings, I think the whole brouhaha is little more than an excuse for the Christian majority to excuse holiday excesses that only recently were cause for guilt.
There's an unattractive undercurrent of intimidation in all of this.
As Washington Post columnist Ruth Marcus wrote last year during a similar outbreak of Yuletide battle fever, "There is an ugly, bullying aspect to this dispute, in which the pro-Christmas forces are not only asking, reasonably, that their religion be treated with equal status and respect but in which they are attacking legitimate efforts at inclusivity."
O'Reilly is not the first to allege a war on Christmas. An article last year on the anti-Fox News Web site News Hounds recalled that Henry Ford made the same allegation in his anti-Semitic tract, "The International Jew."
It was also a favorite refrain of the John Birch Society in the late 1950s.
What happened to the days when the main concern of Christians at Christmas was that the true meaning of the season would be lost amidst all the hoopla over Santa Claus, Rudolph and the unrelenting pressure to spend, spend, spend?
Here's a hint, Mr. O'Reilly: The true meaning has nothing to do with whether the Wal-Mart greeter says, "Merry Christmas" to you when you walk in the door.
If there is a war on Christmas, I think people like Bill O'Reilly are on the wrong side.