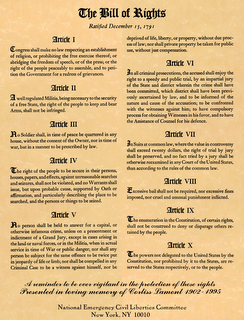 There is no question about Americans willingness to fight and die for the abstractions of rights and freedom. However, when it comes to actually living with those rights and freedoms and extending them to others, there are a significant number of Americans who are something less than generous. Consider this from a Cornell University poll:

About 27 percent of respondents said that all Muslim Americans should be required to register their location with the federal government, and 26 percent said they think that mosques should be closely monitored by U.S. law enforcement agencies. Twenty-nine percent agreed that undercover law enforcement agents should infiltrate Muslim civic and volunteer organizations, in order to keep tabs on their activities and fund raising. About 22 percent said the federal government should profile citizens as potential threats based on the fact that they are Muslim or have Middle Eastern heritage. In all, about 44 percent said they believe that some curtailment of civil liberties is necessary for Muslim Americans.
Conversely, 48 percent of respondents nationally said they do not believe that civil liberties for Muslim Americans should be restricted.

This is Stanley Kutler’s take on the Cornell poll numbers in the New Republic’s Open University blog:

The poll numbers reflected more substantial support for restriction from Republicans and from those who consider themselves "highly religious." Republican voters supported restriction and surveillance efforts two-to-one over Democrats. The highly religious respondents viewed Islamic countries as violent (64 percent), fanatical (61 percent), and dangerous (64 percent). And those avid followers of television news were more likely to favor restricting the rights of Muslim Americans. Go figure.
News of the poll coincided with the death of 97-year-old Harry Ueno. Ueno knew first-hand about restricting the rights of ethnic minorities for he was one of nearly 120,000 Japanese-Americans forcibly removed to "internment camps" during World War II. Most were citizens, and in their eagerness to "fit in," were Christians.
Ueno, his wife, and three sons, were shipped to Manzanar, a camp in the barren mountains of northern California, along with 10,000 other men, women, and children. Uneo worked in the mess hall and discovered that camp employees ran a black market in selling sugar, which was necessary for the operation of alcohol stills. Ueno confronted them, and was promptly arrested, and jailed. An uprising followed and two Japanese-Americans were killed by guards. Ueno spent three years moving to different jails, including a year in solitary confinement. He never was charged with a crime or given a hearing. Ueno's story puts a human face on what must be a mere abstraction for most Americans. Democracy and freedom always hang by the slenderest of threads.
The "internment" camps are a lame euphemism for "concentration camps." True, no ovens for humans operated in Manzanar and other relocation camps, but their occupants had few rights or freedoms. (Well, they could join the Boy Scouts.) Internment is an invitation to abuse, degradation, and humiliation. We only have to note the growing stream of stories regarding the treatment and fate of uncharged prisoners at Guantanamo. Citizens and non-citizens alike, we must remember. Apparently, a few low-level convictions have obscured the larger meaning and issues of the treatment of prisoners-of-war, civilians, and others at the notorious Abu Ghraib prison.
FBI Director J. Edgar Hoover, hardly any paragon for respecting civil rights and liberties, initially opposed the evacuation of the Japanese-Americans. Typically, his position was rooted in jealousy for his bureaucratic authority. He believed--quite rightly--that he had excellent knowledge of Japanese elements (mostly aliens) with a potential for sabotage. No Japanese-American committed an act of sabotage during the war. Ah! The West Coast Military Commander, however, testified that because there had been no sabotage was only proof that some would come. Sound familiar?
In 1988, Congress voted for reparations for surviving Japanese-Americans internees. The amount was a pittance for their loss of nearly four years of productive life, their freedom, and their dignity. The law only applied an imprimatur on what Americans overwhelmingly accepted for more than a half century except for Fox Commentator Michelle Malkin's wholly undocumented, unfair, and unbalanced In Defense of Internment--a work clearly intended to justify further internments in the current war on terror. Against Muslims? It's a free county--usually.
If our Muslim fellow Americans--whether first, second, or third generation--ponder the recent poll, and remember the Japanese experience for citizens and non-citizens alike, and the consequences for internment, then this America is not the land for their dreams, but rather their nightmares. The rest of us should take our cue from the horrendous mistake of the past. The bigots, the uninformed, and the fearful among us are the antithesis of such dreams and aspirations, forgetting their own foreign roots and their elementary lessons in civics. Just what is it they think we are fighting to preserve?

But I think your title means to say country -- not county.

(Though, hey, I suspect it applies to our county just as easily.)

Corrected. Thanks for the heads up.

Well the same principle applies to the fearful uninformed bigots who make a total mockery of U*U principles via their words and actions.