Bush in the Whitehouse bubble 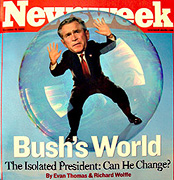 Listening to President Bush speak almost always leaves me with a sense that the man simply is not in touch with what is going on around him. President Bush’s problem goes beyond “inside-the-beltway” thinking. That actually would widen his horizons. His problem is “inside-the-Whitehouse-bubble” thinking. He has bragged in the past of not reading newspapers. His public campaign events were always restricted to supporters or at least those who showed no visible opposition. He avoids those who disagree with him. His staff gives him “happy” reports of progress whether it is dealing with the war in Iraq or the aftermath of Katrina.

Jonathan Chait writes about the bubble-boy in the L.A. Times:

THERE IS a famous "Twilight Zone" episode about a little boy in a small town who has fantastical powers. Through the misuse of his powers, the little boy has ruined the lives of everybody in the town — for instance, teleporting them into a cornfield, or summoning a snowstorm that destroys their crops. Because anyone who thinks an unhappy thought will be banished, the adults around him can do nothing but cheerfully praise his decisions while they try to nudge him in a less destructive direction.
This episode kept popping into my head when I was reading about President Bush and the Baker-Hamilton commission. Bush is the president of the United States, which therefore gives him enormous power, but he is treated by everybody around him as if he were a child.
Consider a story in the latest Time magazine, recounting the efforts — before the commission was approved by Congress — of three supporters to enlist Condoleezza Rice to win the administration's approval for the panel. Here is how Time reports it:
"As the trio departed, a Rice aide asked one of her suitors not to inform anyone at the Pentagon that chairmen had been chosen and the study group was moving forward. If Rumsfeld was alerted to the study group's potential impact, the aide said, he would quickly tell Cheney, who could, with a few words, scuttle the whole thing. Rice got through to Bush the next day, arguing that the thing was going to happen anyway, so he might as well get on board. To his credit, the President agreed."
The article treats this exchange in a matter-of-fact way, but, what it suggests is completely horrifying. Rice apparently believed that Bush would simply follow the advice of whoever he spoke with. Therefore the one factor determining whether Bush would support the commission was whether Cheney or Rice managed to get to him first.
And now that the Baker-Hamilton report is out, the commissioners are carefully patronizing the commander in chief. As this newspaper reported, "Members of the commission said they were pleased that Bush gave them as much attention as he did, a full hour's worth. 'He could have scheduled us for 20 minutes plus 10 minutes for the cameras,' said former Atty. Gen. Edwin M. Meese III." Wow, a commission devoted hundreds or thousands of man-hours to addressing the central conundrum of U.S. foreign policy, and the president gave them a whole hour of his time!
In return for these considerations, the commission generously avoided revisiting the whole question of who got us into this fiasco and how. As the Washington Post put it, "The panel appeared to steer away from language that might inflame the Bush administration." Of course, "inflame" is a word typically associated with street mobs or other irrational actors. The fact that the president can be "inflamed" is no longer considered surprising enough to merit comment.
Indeed, everybody seems to understand that if you want to help amend the disaster in Iraq, the No. 1 rule is that you can't acknowledge it's a disaster in Bush's presence. Weekly Standard Executive Editor Fred Barnes, the court stenographer of the Bush administration, recently reported that this was a key factor in the hiring of Defense Secretary Robert Gates.
Now, I would bet every dollar I own that Gates thinks the war was a mistake. But you can't say that to Bush. "Before hiring him," Barnes wrote, "Bush had to make sure Gates didn't think America's intervention in Iraq was a mistake."
Yes, Mr. President, it's good that you turned Iraq into a Hobbesian inferno of Al Qaeda terrorists and Islamist death squads. It's really, really good!

We are witnessing the last throes of so-called representative democracy...

Just how wise is it for billions of souls to to be at the mercy of a proven idiot just because those with the most money and least scruples put him in power? GW Bush and the greedy scoundrels that surround him are stunning evidence of the utter folly and failures of government driven by money, religion, and politics.

It was clear to me that GHW (papa) Bush was crying recently because he's suffering from the stress of realizing that the debacles caused by his son are ultimately traced to the Bush family's aristocratic ambitions. In other words, the old man and his cabal cronies are as much to blame for Iraq and other evils as the clueless son they foisted upon the world stage. That is why family consiglieri James Baker and smoking man Eagleburger were called in to set the stage for little W's demise.

Royalty, aristocracy, and plutocracy always were and always will be bad ideas and we have been forced to suffer through yet more proof of this. Do you think GW's feelings are more important than the wealth and power of the empire? We're now witnessing the praetorian guard fulfilling their most sacred duty; saving the empire from an insane emperor. Unfortunately for them, it's too little too late.