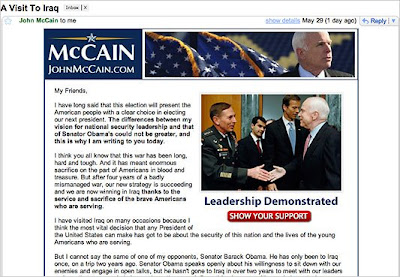 Senator McCain repeatedly appeals to the authority of Army General David Petraeus to justify his own positions pertaining to the conflict in Iraq. McCain has difficulty articulating his support for current policy in Iraq and drops Petraeus’ name repeatedly suggesting that the General’s recent tactical successes in the field justify Washington’s policy.

General Petraeus has performed brilliantly but before he is promoted to sainthood it is important to remember that it is the civilian leadership of this country – the President in conjunction with congress – that determines policy, not the military. It is the mission of the military to carry out that policy when armed forces are required. All indications are that General Petraeus is well aware of this but it appears that Senator McCain, who is seeking to become the Commander in Chief, is not.

It is inappropriate to continually insert a serving military commander’s name in ongoing political debates insinuating the commander is somehow endorsing, however indirectly, a particular candidate. That compromises both the commander and his or her mission. The McCain campaign has already been criticized for using General Petraeus’ photograph for fundraising.

Anyone who watched the presidential debate between John McCain and Barak Obama last Friday night had the opportunity to witness McCain's unabashed infatuation with Army General David Petraeus. The newly-minted head of US Central Command (CENTCOM), who was recently the commanding general of US forces in Iraq, was mentioned by name nine times in Friday's debate, eight of which were made by McCain alone. On one instance, McCain mentions Petraeus three times in answer to just one question. In defense, there were times when the general's name was tossed around rather innocuously, but that was not always the case. There were other points in the debate where McCain was clearly seeking to gain an advantage over Obama by invoking Petraeus. This should raise a few eyebrows for three main reasons.

First, it is dangerous for the state of civil-military relations in a developed democracy like the US. An active duty general should not be injected into politics at any level, especially not in the midst of a heated presidential campaign. Period. McCain used Petraeus to support his policies and points of view and to disparage those of his opponent. Here are two such instances, the first of which also involves the mention of another high-ranking active duty military officer, Admiral Mullen, the current Chairman of the JCOS:

OBAMA: That's not the case.

OBAMA: What he said was a precipitous...

OBAMA: ... withdrawal would be dangerous. He did not say that. That's not true.

Now General Petraeus has praised the successes, but he said those successes are fragile and if we set a specific date for withdrawal -- and by the way, Senator Obama's original plan, they would have been out last spring before the surge ever had a chance to succeed.

But the important thing is, if we suffer defeat in Iraq, which General Petraeus predicts we will, if we adopted Senator Obama's set date for withdrawal, then that will have a calamitous effect in Afghanistan and American national security interests in the region. Senator Obama doesn't seem to understand there is a connected between the two.

Petraeus is, in many ways, a remarkable military officer who embodies the type of leadership the US military needs to succeed in a 21st century world. His efforts in Iraq have undoubtedly contributed to the recent downturn of violence in Iraq. But, while his accomplishments in Iraq are welcome and laudatory, and the merits and long-term success of the "surge" debatable, injecting the viewpoint of Petraeus into a political contest is out of place.

Furthermore, even if you disagree with my argument that the use of Petraeus in this fashion during a presidential debate crosses a line, there is still the issue of the extent to which a sitting president leans on the military to shape and conduct US foreign policy. It is one thing to heed the advice of the military on certain issues (e.g. the feasibility of certain policy options; the most suitable military solution in the heat of combat, rescue operation, etc.). It is another to have the advice of the military - and just one member of the military at that - guide the course of a nation's foreign policy. The military does not set policy in the US. The civilian leadership does. (When then-CENTCOM Commander Admiral Fallon made a series of remarks regarding Iran that were seen as going against the current policy or strategy of the US, I spoke out against that, even though his views on the matter were largely aligned with mine.)

Second, it is problematic from an argumentative perspective for McCain to repeatedly reference the views and statements expressed by Petraeus to bolster his own views and credibility. This "appeal to authority" is not the sign of a candidate who exudes much confidence in his own convictions. It is also an attempt to make Obama's positions appear indefensible by stating that, since Petraeus seemingly disagrees, Obama's policy prescriptions are somehow by definition irresponsible and misguided.

Finally, McCain's usage of Petraeus links the general to the surge, the sole factor credited by McCain of recently bringing some semblance of stability to Iraq. Yet the surge was merely one causal factor among many - or, more specifically, the confluence of several factors - that are responsible for the downturn in violence. The others, as has been repeated ad nauseam here and elsewhere, are/were: the "Sunni Awakening," which began in the al-Anbar province and spread to other areas of the country, whereby Sunni militias turned against al-Qaeda in Iraq and sided with the US military; the decision by Moqtada al-Sadr and his militia to institute a ceasefire against US troops; and the walling off and ethnic separation of Baghdad residents. The surge coincided with these other, unrelated developments, and the strategic flexibility that resulted from the large influx of troops allowed the US to crucially exploit them.

So, where Obama is too slow or reluctant to acknowledge the surge's role in the recent drops in violence, McCain is far too eager to assign all of the credit to the surge. Nowhere in the debate does he make note of the other factors present. Instead, Petraeus is name-dropped ("So there was a lot at stake there. And thanks to this great general, David Petraeus, and the troops who serve under him, they have succeeded.")

Meanwhile, the situation in Iraq is tenuous and not irreversible, which to McCain's credit, he openly states. Very serious questions remain about the long-term stability of Iraq as a unified, federalized nation-state, the basis of which is the key pillar US policy - past, present, and future - must be judged against. If McCain is unable to recognize or acknowledge what has created a modicum of security in Iraq in the interim, he has more problems than just his debating style.