McCain's deal with the devil 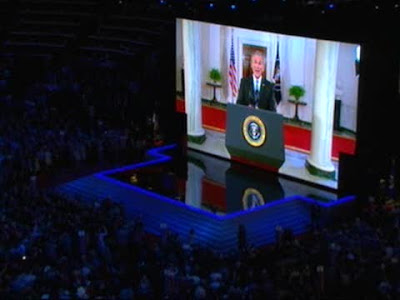 The theme of Tuesday night’s Republican Convention was to introduce American voters to 72-year-old Senator from Arizona, John McCain. He was extolled for his experience as a prisoner of war in Vietnam 41 years ago and as a reformer in Washington (without reference, of course, to Charles Keating).

But the night also featured incumbent President George Bush in his farewell speech to the Republican faithful. It was an awkward moment. McCain, who has served in Congress and the Senate since 1982, is running as a Washington outsider. He is running as a challenger to the powers-that-be in Washington as the nominee of the party that has held power in the White House for the past eight years and in Congress for six of those eight. He is hoping to succeed one of the most unpopular presidents in American history. His campaign is one of presenting himself as all things to all voters – the challenger and defender to the status quo. As the New York Times put it, the undercurrent to the convention last night was McCain’s effort to distance himself from George Bush – still popular with the Republican right but unpopular with the larger American public. Bush did not appear in person at the convention but his image was beamed to a large screen in the St. Paul convention center while the President spoke from Washington. It was symbolic of the distance McCain is trying to put between him self and Bush. As Michael Crowley put it, Bush “looked like a man in exile--or maybe a quarantined leper.” Still, McCain needed a Bush presence of some sort and the giant TV screen was a compromise.
For John Dickerson it was a night on contradictions:

The first official night of the Republican Convention was one for contradictions. Party stalwarts gathered to celebrate both members of their ticket for bucking their party. The man who waged one of the most desultory campaigns for president in recent memory gave the most rousing speech. And the night ended with a call for loyalty from a member of the opposition party.
John McCain was celebrated for bucking entrenched interests, even in his own party. He was praised for standing up to Republican icon Ronald Reagan just after Reagan had been heralded with a video. Sarah Palin was also cheered for bucking her party. The crowd roared to hear that McCain would change Washington, D.C.—even though that same crowd had just cheered loudly for George Bush, the leader of their party and the person most responsible for the situation that needs changing.

For David Corn the Bush speech represented McCain’s deal with the devil:

Having Bush speak on Who Is McCain night is more proof of the hollowness of American politics.

Only eight years ago, Bush supporters, during the 2000 primary contest between Bush and McCain, waged a whispering campaign to try to define McCain as a syphilitic, Manchurian Candidate who was married to a mob-linked, drugs-abusing wife and who had fathered an out-of-wedlock black child. At the time, the Bush campaign--and Bush himself--said nothing to distance itself from the vicious rumor-mongering. Of course, the McCain camp suspected that Karl Rove and the Bushies were actually behind the effort. Compare that to how Barack Obama has publicly declared that Sarah Palin's family life ought not to be a campaign issue.

In any event, Bush's appearance tonight will close a circle on the Bush-McCain relationship. Bush will return the praise that McCain, sacrificing honor and principle for expedience, (insincerely) heaped on Bush at the 2000 convention. And Bush's appearance will be a reminder to voters that McCain, the so-called straight talker, has forged a phony bond with Bush to advance his political career. It turns out that not even a hurricane could blow away McCain's deal with the devil.

And Alan Brinkley is puzzled by what McCain’s strategy is:

After tonight's festivities--which, Thompson's speech excepted, were pretty dreary--the real puzzle of this convention to me is what McCain's strategy is at this critical juncture of his campaign. During the primaries, he pandered to the far right at every opportunity. Then, after clinching the nomination, he began moving back toward the center--criticizing more and more of the Bush administration's policies, embracing the fight against global warming almost to the point of sounding like Al Gore, and on almost every issue but the Iraq war, sounding less and less like a Bush Republican and more and more like the maverick he would like us to think he is. And yet, he has just chosen an unknown running mate with right-wing views that put almost anyone in the Bush administration to shame--support for creationism in schools, rejection of the idea that human action contributes to global warming, no abortion even for victims of rape and incest, support for Pat Buchanan in 2000. Has McCain given up on the centrist voters that he claimed he needed to win? Is he reverting to Bush's 2004 strategy of mobilizing the troops of the far right? Conventions are not usually the moment for a major shift in strategy, but it is a real question as to what McCain's strategy is, or can be, after this choice--which takes away much of his inexperience argument and pushes him much further to the right than he seemed to want to be. Did he actually know how right-wing Palin was when he chose her?

Right now it is clear McCain will do whatever it takes to get elected and if that means making a deal with the devil whether it is kissing up to Bush, selecting Palin as his running mate to appease the right-wing fringes in this country or whatever, he seems fully prepared to do it. Whatever independence the four-term Senator may have represented (if he ever really did) is gone. His campaign seems out of control has he gets pulled in different directions by different forces in his party. It seems the “Straight Talk Express” has been replaced by the “Pandering Local.” This national campaign is an example of his executive style and is a clear sign of how a McCain White House would operate which would not be in the best interests of this country.
Posted by Sisyphus at 9:41 AM

The McCain of mythology would have lauded his strict moderate principles, but instead of that he has pandered to the base.

I doubt that doing so was a defensive posture against Obama. The problem with McCain's stance is that it embraces the Democrat's refrain that McCain is running for Bush's third term. If he wanted to avoid this albatross, he would have been wiser to adopt a moderate platform.