John McCain – prisoner of the past 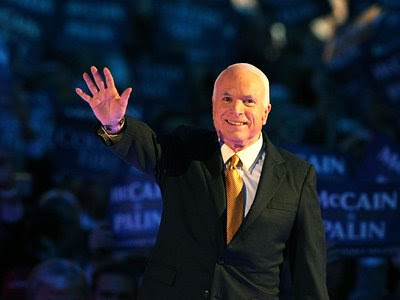 Of the four major speeches delivered across the two major conventions, I have the least to say about John McCain's speech, though perhaps that's because it was the speech in which the least was said. In a sense, the digitized backdrop behind McCain was a perfect symbol for the address: It began with a generic American house, moving quickly to a generic American flag, ending with recorded fireworks. Clip art for the nationalistic set, but moving if you've rarely seen such images before. And so too with his speech.

Of course, you must say this much: McCain's recounting of his experiences as a prisoner of war remain powerful. But that was 40 years ago. He has now been campaigning for president for the better part of a decade. He needs more than a story. He needs a vision.

Yet tonight's speech was all about him. The policies are his qualities, the vision is his story, the vice president is his understudy. For all that he mocks Obama for being "the one," it is McCain who has rested the weight of a presidential candidacy atop his person. He is skilled at deflecting that perception, recasting one man's candidacy as an expression of every man's patriotism. But the common denominator in these humble asides remains McCain himself. "I've been an imperfect servant of my country for many years. But I have been her servant first, last and always," McCain says. "My country saved me," he recalls, "and I cannot forget it." The signs wave. "Country First," they read. And then, below: "John McCain." Such public declarations of patriotism are not about why John McCain loves this country. They are about why this country should love John McCain.

When you stepped outside of McCain, however, there was very little to the speech. Over the course of nearly an hour, he managed to detail exactly three policies. Taxes, which he will push lower. Education, which he will make more competitive. And high energy costs, which he will solve with a drill and a dream. Where policies would ordinarily have gone, McCain instead substituted qualities. He's a fighter, he said. He's a patriot. He admitted to being humble and selfless and tested and independent and confident. Maybe that will be enough. Those are, undoubtedly, some good qualities. But no man is an agenda. No past is profound enough to stand in for the future. McCain didn't look self-assured on that stage. Not in comparison to Barack Obama or Joe Biden or even Sarah Palin. He looked fragile. And tired. And understandably so. John McCain's whole campaign rests atop his shoulders. And it is a heavy load.

Klein is right – this speech was pretty thin gruel delivered by a very tired looking candidate. There was also something schizophrenic about the words from the podium and the reality. Senator McCain spoke of reform and shaking things up in Washington as if he were approaching this race as an out-of-power outsider. But the 72-year-old Senator from Arizona has been a Washington insider for over a quarter of a century and it has been his party that has controlled the White House for the past eight years and congress for six of those eight. If there is a problem with the way Washington operates, he is part of the problem, not the solution. He is enmeshed in the system and is an ally of the Bush White House. Are he, and the other Republicans at this convention, celebrating Republican rule or challenging it?

And then there were his appeals to bi-partisanship. Did he not hear Sara Palin’s speech the night before? Clearly he wants it both ways – fire up the base yet appeal to independents and Democrats – but his limp delivery and contrast to his running mate makes him come across as insincere. The delegates in that hall would not have left excited if they truly believed McCain’s election would begin an new era of bipartisanship. They see it for what it would be: a Bush third term.

Finally, a large segment of his acceptance speech was dedicated to talking about himself. He bragged about what a maverick he fancies himself to be. And, of course, he milked his POW experience for all it is worth in an embrace the cult of heroism. He claims it has shaped his character and it is of no coincidence that his campaign manager claims this election will be determined by the character of the candidates rather than their positions on issues. But has his character not developed or matured since? McCain was a POW almost a half century ago. Is he just frozen in time?

And while his bravery in 1967 is certainly admirable the bottom line is he is a survivor. The traditional sense of a hero is the individual whose leadership turned the tide of the battle or whose self-sacrifice saved the lives of comrades or innocent civilians. McCain is a hero because he survived a terrible experience. He never claimed to have taken control of the situation rather he admitted the situation changed him. His heroism is what the late Christopher Lasch called the "therapeutic" mindset – in the messiness and moral ambiguity of the Vietnam War, acts of heroism were not outward acts but inward.

McCain changed from survivor-as-hero into a hero-as-celebrity and then celebrity-as-politican. The whole foundatioin of his appeal to voters in this election has nothing to do with what he will do in the future but rather what he did (or was done to him) over four decades ago. Don’t be surprised if the McCain campaign reminds you of that again and again in the next sixty days. In 1967 he was a prisoner of war in a foreign country and in 2008 he is a prisoner of the past in the Republican Party.

If she truly is running for a third Bush term and wants to style himself as a maverick, he certainly has done a weak job of refuting that critique.