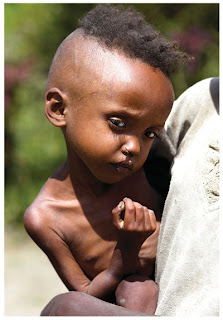 The world is facing a growing food crisis. Biofuels are causing shortages of grain and forcing food prices up in general. Climate change resulting in flooding and droughts in different parts of the world causes loss of many crops and contributes to food shortages. Increased consumption of food – particularly in the booming economy of China – is a factor in food shortages and higher food prices elsewhere in the world.

This crisis can threaten local and global peace and security as the losers in this equation resort to violence. The problems arising from climate change, the shift to biofuels, and increased food consumption in formerly impoverished nations are all complex but need to be addressed because this is obviously not a short term problem.

This is from Sunday’s Observer:

You can read the entire article here.
Posted by Sisyphus at 9:12 AM